Vienna's horse-drawn carriages, a staple of street life in the Austrian capital and a popular tourist attraction, have been sidelined by the coronavirus pandemic - so they are now helping deliver food to the elderly.

The carriages, or "Fiaker" as they are called in Vienna, are taking part in a food delivery scheme in one of the city's central districts set up by the InterContinental Hotel, itself severely hit by lockdown measures taken to halt the spread of the virus.

Instead of catering to guests, the hotel's kitchens have been turning out 200-300 meals a day for senior citizens in the area.

Deliveries are made by volunteers using all manner of vehicles - including by part-time "Fiaker" driver Christian Gerzabek.

Despite business coming to a standstill, "the horses still have to be moved, they want to get out after the winter," he says. 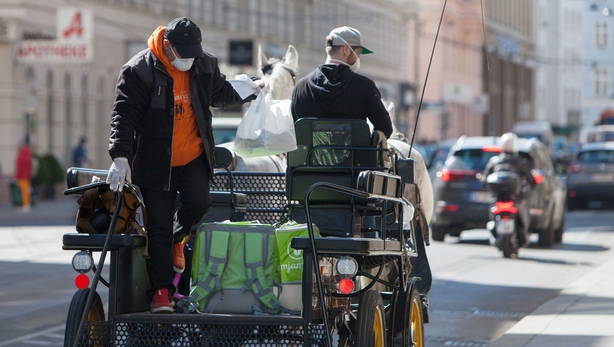 "I thought that we should combine that.. with doing something good for people who need it," he told AFP.

The scheme has been a lifeline for its elderly beneficiaries.

One of them, Anneliese Nebenfuehr, said she thought the deliveries were "wonderful".

"I told the gentleman on the phone to give a kiss to the whole team," she said.

InterContinental general director Brigitte Trattner said carriage drivers were the first to respond to a call for delivery volunteers, with car drivers and cyclists also signing up.

Describing the InterContinental Vienna as an intrinsic part of Vienna's third district, Ms Trattner said that when the coronavirus crisis broke "we naturally thought: Is there anyway we can help?"

The hotel plans to run the project until Monday, and after that Ms Trattner says meals would be distributed to staff at the Rudolfstiftung hospital, which is also nearby.