Jack and Emily remain the most popular baby names in Ireland, according to the latest figures released by the Central Statistics Office.

The annual release of the most popular names for newborns shows that Jack and Emily have continued to assert their dominance at the top of the charts.

Jack has been the most popular for boys for every year bar one since 2007, with 2016 the only exception when James emerged on top.

When it comes to girls names, Emily has been the most popular choice every year since 2011.

The top five most popular boys names include James, Noah, Conor and Daniel, while for girls it is Grace, Fiadh, Sophie and Hannah.

CSO figures show girls are given a wider variety of names than boys with 4,814 girls' names registered compared to 3,725 boys' names.

There are a number of new entries to the top 100 for both boys and girls. 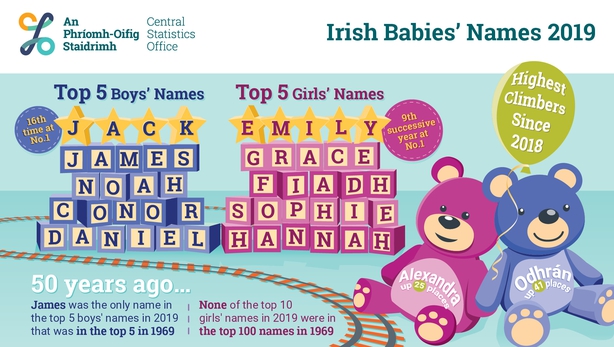 Odhrán, Eli, Ruairí and Joey were new entrants for the boys, while Doireann and Méabh were new entries for girls.

In terms of names with the most growth over the last year, Odhrán, Eli, Kayden and Ruairí made the most growth in the boys charts, while Alexandra, Heidi and Hollie were the fastest-growing girls names.

The top 20 boys and girls names are included below. The full top 100 can be seen on the CSO website.