French police have clashed with firefighters protesting in Paris against their working conditions and demanding more pay.

Thousands of firefighters attended the protest in the French capital, asking for an increase of their hazard bonus, which has not changed since 1990.

Police fired tear gas and hit some protesters with batons.

In October, firefighters also protested in Paris, calling for better pay, guarantees of their pension benefits and greater respect for their profession.

The strikes have impacted across France, with trade unions threatening last week that they could continue for months to come, as they try to force Mr Macron to ditch the biggest overhaul of the country's pension system since World War Two.

Mr Macron has made some concessions to the unions but refuses to abandon his reform.

The unions on Friday brought thousands of protesters onto the streets for a seventh round of nationwide demonstrations, although their large-scale actions are petering out and they are increasingly resorting to wildcat actions to cause disruption.

"Our determination remains intact," Yves Veyrier, head of the Force Ouvriere union, told reporters ahead of a street march in Paris. "We have weeks, months, of protest ahead of us." 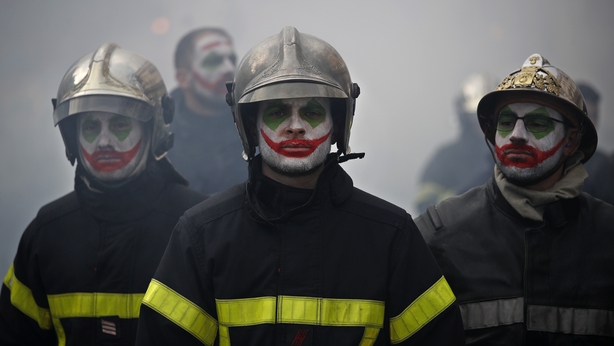 Mr Macron wants to streamline the existing set-up of 42 different pension schemes, each with their own levels of contributions and benefits, into a single system that gives every pensioner the same rights for each euro contributed.

The myriad special benefits deter job mobility, saysMr  Macron, for whom the reform is central to his drive to create a more flexible labour market.

Trade union opponents say the reform will require people to work longer for a full pension.

Walkouts at power plants have reduced electricity generation, meaning power demand is outstripping supply due to cold weather, leaving France a net importer of electricity from its neighbours.

Under pressure from the unions, he has withdrawn raising the retirement age for a full pension by two years to 64.