Billions of locusts swarming through East Africa are the result of extreme weather swings and could prove catastrophic for a region still reeling from drought and deadly floods, experts said.

Dense clouds of the ravenous insects have spread from Ethiopia and Somalia into Kenya, in the region's worse infestation in decades.

The UN's Food and Agriculture Organization (FAO) estimated one swarm in Kenya at around 2,400 square kilometres, meaning it could contain up to 200 billion locusts, each of which consume their own weight in food every day. 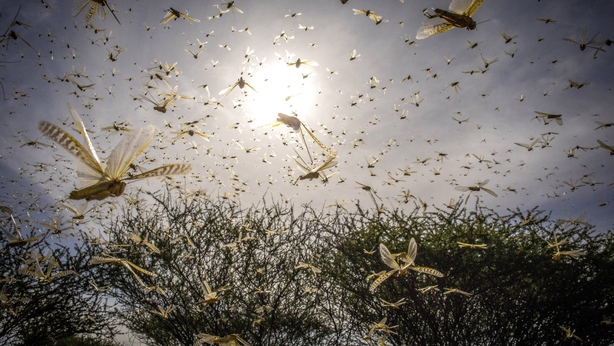 If unchecked, locust numbers could grow 500 times by June, spreading to Uganda and South Sudan, and devastating crops and pasture in a region which is already one of the poorest and most vulnerable in the world.

This could lead to "a major food security problem", Guleid Artan of a regional expert group, the Climate Prediction and Applications Centre (ICPAC), told a press conference in Nairobi.

The locusts, he said, were the latest symptom of extreme conditions that saw 2019 start with a drought and end in one of the wettest rainy seasons in four decades in some parts - with floods killing hundreds across East Africa.

Mr Artan said the invasion had come after a year of extremes which included eight cyclones off East Africa, the most in a single year since 1976.

This was due to a warmer western Indian Ocean, a climate condition known as the Indian Ocean Dipole which has conversely led to severe drought in Australia that is experiencing its own extremes: bushfires, hail and dust storms.

"We know East Africa is one of the most vulnerable to climate change. We know this region will see more extremes," he warned.

One expert at the press conference in Nairobi had to reassure attendees that the locust invasion following the drought and floods was not a portent of the biblical "end of times".

The massive swarms entered Kenya in December and have torn through pastureland in the north and centre of the country. 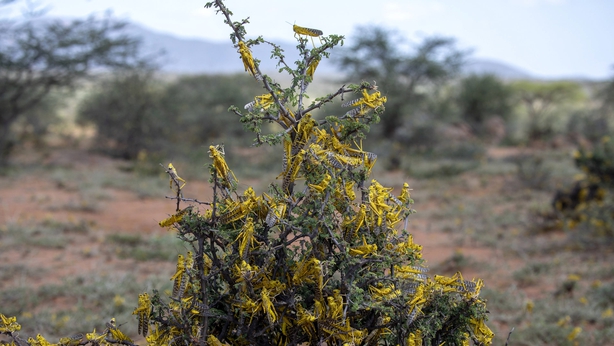 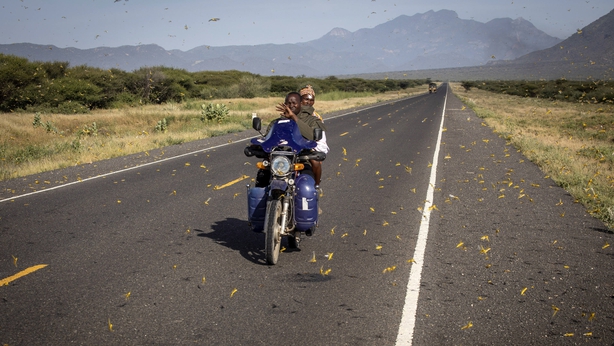 While farmers were relatively lucky as their crops had already matured or been harvested by the time they arrived, herders face another heavy blow as vegetation for their animals is consumed by the voracious locusts.

Mr Artan said the pastoralists were just emerging from three years of drought, and that recovery from a dry spell usually takes them up to five years.

And if the locusts are not brought under control by the start of the next planting and rainy season - typically around March - farmers could see their crops decimated.

As thick clouds of the insects descend on plants and blacken the sky, Kenyans have been seen shooting in the air, banging cans and racing around, waving sticks in desperation to shoo them away. According to the regional Food Security and Nutrition Working Group (FSNWG), East Africa is already experiencing a high degree of food insecurity, with over 19 million people experiencing acute hunger.

Save the Children's Regional Director for East and Southern Africa, Ian Vale, said in a statement on Wednesday that the NGO's staff in Kenya were battling "swarms so thick they can barely see through them."

"This new disaster bodes ill for the region in 2020...The erratic weather of 2019 and the decade prior has already severely eroded the capacity of families to bounce back from unexpected crises." 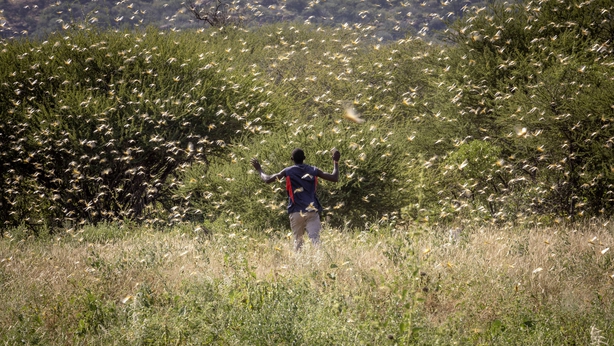 Stephen Njoka, director of the Desert Locust Control Organisation for Eastern Africa, which is based in Nairobi, said Kenya had five aircraft spraying pesticides on swarms, and four others conducting surveillance.

He said the chemicals did not pose a threat to humans and that authorities were doing their best to limit damage to other small insects, pollinators and pastureland.

Similar control operations are underway in Ethiopia and Somalia. However insecurity in Somalia was hampering some spraying operations, the FAO has said.

The species is desert locusts, which are notoriously difficult to control as they often occur in remote areas and can move up to 150 kilometres in one day.