A Peruvian mother of conjoined twins is celebrating "a Christmas miracle" this year after her babies came home for the first time after undergoing a successful operation to be surgically separated.

The babies, Edgar and Dominick, were born in a caesarean procedure last December.

They arrived home last Saturday after recovering at the National Institute of Children's Health hospital in the San Borja district of Lima, where their nearly 18-hour surgery was performed in September.

Cases like theirs, known as Ischiopagus twins, which are twins conjoined at the lower part of the pelvis region up to the abdomen, are extremely rare, occurring once every 200,000 births.

Dr Luis Apaza, head of neonatal and paediatric surgery at the hospital, credited the entire institution for the successful operation.

"It's a success and also a miracle, but it also reflects the work of a team of everyone who works at this institution.

"What doesn't have a price is the smile of the parents and the happiness in being able to reunite the family with them [the twins] separated," Dr Apaza told Reuters.

The first part of the surgery consisted of separating the twins. Doctors had to pay particularly close attention to nerve roots on each of the babies' bodies, so that the boys would not lose mobility in their legs.

Doctors said another difficult part was separating the urinary and digestive tracts as well as hips, all of which the twins had previously shared.

The second part involved reconstructive surgery. Doctors predicted that the twins would likely have to return to additional surgeries as they grow older. 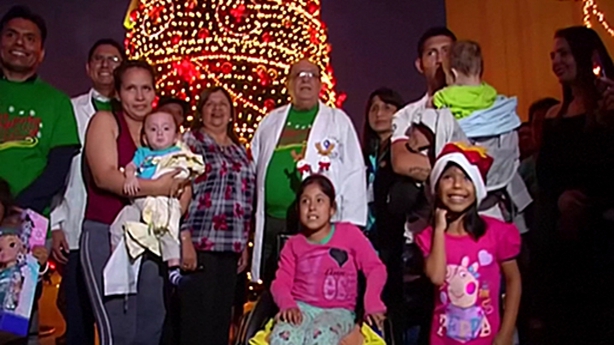 But for now, mother Xiomara Morales is happy to have them at home.

"It's a Christmas miracle. I spent last Christmas hospitalised from the caesarean and they were as well.

"We did not spend it together and this Christmas, I'm going to spend it with my family, and with them, and it's their first year.

"That was my Christmas gift. I wanted them to be here with me, separated," she told Reuters.

About 40-60% of conjoined twins arrive stillborn, and about 35% live only one day, according to research from the University of Maryland Medical Centre.

Doctors say mortality rates for twins who do live and then undergo separation vary, depending on their type of connection and the organs they share.