A Ming masterpiece owned by a lucky Cork family has sold at auction for more than €600,000.

There was applause in the room when it sold for €610,000 at Sheppard's Irish Auction House in Durrow, Co Laois yesterday.

In September, the family had a pleasant surprise after bringing the vase to a Blarney Castle charity valuation.

There they learned that the piece they believed had been worth only a few thousand euro was actually a rare Ming dynasty artefact, then said to be worth €40,000- €60,000.

The flask had been with the family since the 1960s and was inherited from an elderly cousin 15 years ago. 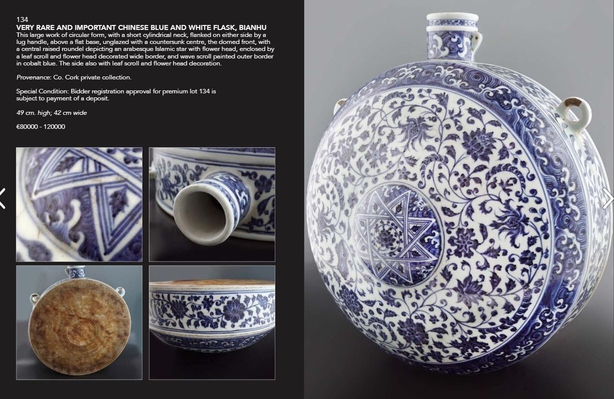 Philip Sheppard of Sheppards described as it as an "extraordinary piece" and "extremely rare".

He said these pieces were "very difficult to make", saying "few were made" and "few have survived".

The piece is described as a Syrian water carrier with an Islamic star. Mr Sheppard said it had "no function other than beauty".

The buyer was from mainland China. There had also been interest from the US, London, Hong Kong, Taiwan and Singapore.

Bidders for such a high value piece have to register in advance with a €30,000 deposit.