An Israeli start-up is hoping to tap into consumer concerns about health, environment and animal welfare with its lab-grown steaks.

While lab-grown hamburgers and chicken are in development around the world, Israel's Aleph Farms claims to be the first company to develop steak in a laboratory.

Aleph Farms says it's in talks with some high-end restaurants in the United States, Europe and Asia to have it on the market by 2021.

It plans initially to offer minute steak that is developed from a small number of cells taken from a cow, without having to slaughter the cow in the process.

"This small amount of cells serve as a basis for getting more and more cells and from these cells we create the different cell types that comprise the muscle cut -- which is actually the steak that we are eating," Aleph Farm's VP R&D, Dr. Neta Lavon explained in the company's lab in the Israeli town of Rehovot.

These cells allow lab workers to create muscle cells, connective tissue cells, fat cells and blood vessels cells, all four are then combined together in a specific ratio and grown on a 3-D scaffold to create a piece of meat that is as similar to the origin as possible in shape, taste and texture, Dr Lavon said.

She also noted that the fact that the meat is being grown in a lab, where it receives exact nutrients and is kept in a tightly monitored incubator, makes it healthier than commercial meat. 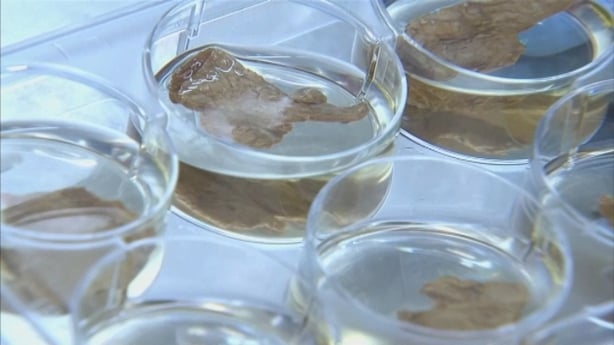 "The process of creating the meat cut is in closed vessels that allow no contamination and accordingly we don't need to add any antibiotics. More than that, we can enrich the meat cut with specific nutrients that are important to our nutrition and even tailor it for specific populations that we want to adopt the meat cut to their requirements," she said.

Aleph Farms hopes to have its product on restaurant menus under a trial phase beginning in 2021, aiming for an official launch in 2023, first in restaurants and then in stores.

"Imagine the same steak, the same experience, same taste, same texture, but produced in a way which is more ethical, more sustainable and without all the public health issues associated with animal farming," said Aleph Farms' Co-Founder And CEO, Didier Toubia.

Mr Toubia set up the company in 2017 in partnership with Technion - the Israel Institute of Technology and foodmaker Strauss Group's incubator The Kitchen.

In May it raised $12 million from investors including Cargill, and has now raised $14 million to date.

"The global market for animal protein is estimated today at over $1 trillion annually and is growing," Mr Toubia told Reuters, adding that the company has ambitions to be one of the world's top three meat producers within 20 years

A serving of minute steak - a thin slice of meat that cooks very fast - currently costs around $50 but Aleph Farms says it hopes to bring that down to a slight premium to current prices of steak offered in restaurants.

Eventually it aims for mass production, bringing the price down further and making its steaks viable for sale in lower-priced steak houses. Aleph Farms is already planning for its next product to be a thick steak.

The number of start-ups producing laboratory-developed meat has risen from four at the end of 2016 to more than two dozen by last year, according to market researcher the Good Food Institute.