Thousands of school children and university students across Switzerland have skipped class to march in the streets and demand climate action, telling politicians "there is no planet B".

Despite vows from a number of school districts to show zero tolerance for those who missed class, pupils as young as 12 turned out across at least 15 Swiss cities and towns for the "climate strike".

The protest was inspired by Greta Thunberg, a 15-year-old Swedish girl who since last August has been missing school each Friday to protest in front of Sweden's parliament demanding concrete action from politicians to halt climate change.

After she garnered international headlines with a fiery speech before world leaders at last month's COP24 climate talks in Poland, thousands of students have followed in her footsteps.

"Climate strikes" have been staged in several countries, including Australia, Belgium, Britain, Canada, Japan and the US.

The strike in Switzerland kicked off this morning in Lausanne, where thousands of young people marched through the streets, local police said.

More marched across Geneva later on, ending up in front of the United Nations' European headquarters. 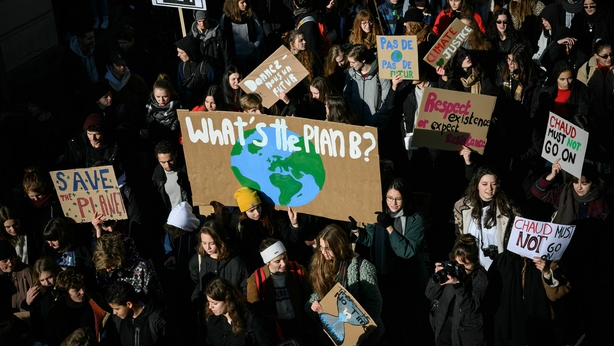 "I am demonstrating so that we can give ourselves and our children a future. We are the ones who are the most affected, we are the ones who will be alive in 30, 40, 50 years," 19-year-old Alexandre Huggel told AFP.

"If we don't act now, if we don't start taking measures (against climate change) we will run into a brick wall."

The crowds used humour and word-play to get their message across.

Protesters in Geneva waved homemade cardboard signs with statements such as: "If the climate was a bank, it would have been rescued already" and "The planet is hotter than my boyfriend".

"System change, not climate change," read a placard in Zurich, while protesters in Lausanne warned that "the oceans are rising up, and so are we".

The huge turnout came despite the fact that a number of Swiss cantons, such as Wallis and St Gallen, warned they would penalise students who missed class to protest.

Geneva meanwhile authorised students to take several hours off to join the protests, although for minors it required parents to sign permission slips.

"Frankly, I would rather demand climate action than go to school. Otherwise, years from now, we may no longer be here," 12-year-old Selma Joly said.