Violence has erupted in southern India after two women defied traditionalists to enter one of Hinduism's holiest temples for the first time since a landmark court ruling.

The Supreme Court in September overturned a decades-old ban on women of menstruating age setting foot inside the gold-plated Sabarimala temple.

But in a surprise pre-dawn operation today heralded by activists but enraging conservative devotees, police enabled two women to access the hilltop temple and then leave again undetected, officials confirmed.

Video images showed the 42-year-old women, Kanaka Durga and Bindu, who has only one name, wearing black tunics with their heads bowed as they rushed in.

"We did not enter the shrine by climbing the 18 holy steps but went through the staff gate," one of the women, who both remain under police guard, later told reporters.

Kerala's Chief Minister Pinarayi Vijayan said: "It is a fact that the women entered the shrine. Police are bound to offer protection to anyone wanting to worship at the shrine."

As soon as news of today’s breach spread, the temple head priest ordered the shrine closed for a purification ritual. 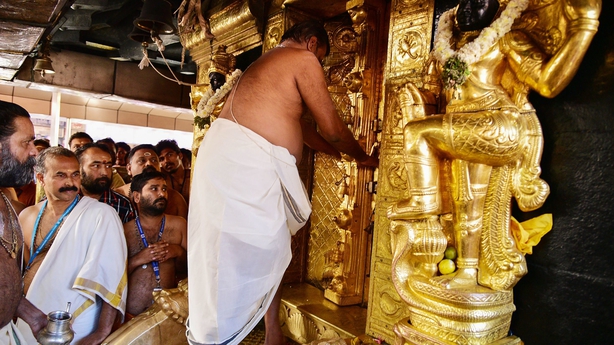 It reopened after around an hour.

Later violent clashes were reported between scores of people chanting slogans in front of the state parliament in Thiruvananthapuram.

Police with batons also charged at protesters who were trying to enforce a shutdown of shops in the area called for by the Sabarimala temple hierarchy.

Yesterday, tens of thousands of women formed a human chain across Kerala to back the demand for access to the temple.

Media reports said some were heckled by right-wing activists.

Women formed a human chain across Kerala to back the demand for access to a Hindu temple pic.twitter.com/PTLS00xJEz

Mr Modi's government did not immediately react to news of the women entering the temple, but activists celebrated.

"Watching the visuals of them making their way into the shrine makes me cry in joy - how long it has taken for us to claim space, to write our way into history," wrote feminist author Meena Kandasamy on Twitter.

Local BJP leaders have said they would observe a two-day protest across Kerala against the breach.

The state is ruled by an alliance of left-wing parties.

"Such cheap tactics are unbecoming of a state government," he said on Twitter.

September's verdict was the latest progressive ruling from the court, with judges also overturning bans on gay sex and adultery last year - posing a challenge to Mr Modi's traditionalist BJP.

In rare comments regarding the Sabarimala temple yesterday, Mr Modi - running for a second term in elections later this year - appeared to support the ban, saying the matter was related to tradition.

"There are some temples which have their own traditions, where men can't go. And men don't go," Mr Modi told Indian media.

The restriction on women at Sabarimala, situated on top of a 915-metre hill in a tiger reserve that takes hours to climb, reflects a belief - not exclusive to Hinduism - that menstruating women are impure.

Traditionalists argue also that the temple deity, Ayyappa, was celibate.

Repeated efforts by women to enter the temple since September have been angrily rebuffed by Hindu devotees with police having to step in to escort them away to safety.

In October, devotees clashed with police in a town near the temple leading to the arrest of more than 2,000 people.

The Supreme Court is to start hearing a legal challenge to its ruling on 22 January.

Women are still barred from a handful of Hindu temples in India.

The entry of women at Sabarimala was taboo for generations and formalised by the Kerala High Court in 1991.