Every minute, smokers get through nearly 11 million cigarettes and ten die from the habit, experts say, in an industry that generates billions of dollars.

Today is World No Tobacco Day - Experts say tobacco is the leading cause of preventable death | https://t.co/QoKyqSABsE pic.twitter.com/eqOQy51TeN

Today is World No Tobacco Day and here are some facts and figures on smoking:

How many people smoke?

There are around one billion smokers in the world, about a seventh of the global population, according to the World Health Organisation (WHO) and other estimates.

China has the highest number: of its population of 1.3 billion, about 315 million are smokers and they consume more than a third of the world's cigarettes, the WHO said in a report last year.

Indonesia has the highest proportion of smokers at 76% of men aged over 15.

About 80% of the world's smokers live in low- and middle-income countries and 226 million of them are considered poor.

A study published in The Lancet medical journal in April 2017 says the percentage of people using tobacco every day has dropped in 25 years.

But reductions in smoking rates in some nations "are almost entirely offset by the increasing consumption in many countries with weaker tobacco control regulations," says the Tobacco Atlas anti-smoking lobby.

These include poorer parts of the world, in particular in sub-Saharan Africa.

Tobacco use has decreased in places such as Australia, Brazil and Britain, where anti-smoking measures include higher taxes, bans and health warnings.

Ireland has set a target to be tobacco-free by 2025 - meaning a smoking prevalence rate of less than 5%.

Tobacco sales have even declined in China, down by 10% from a peak in 2012, according to the Euromonitor International market research group. 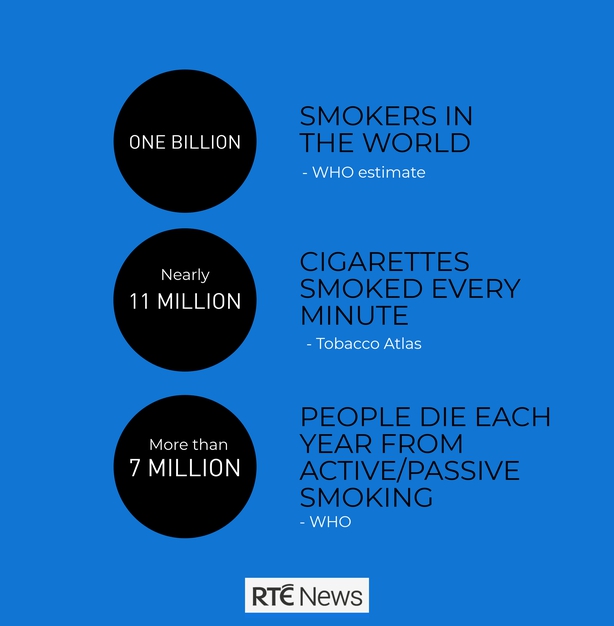 Tobacco is the leading cause of preventable death, experts say.

Active or passive smoking kills more than seven million people every year, according to the WHO, with tobacco consumption blamed for the death of on average one person every six seconds.

Over the 20th century tobacco claimed 100 million lives - more than the 60-80 million deaths during World War II and the 18 million in World War I combined.

At current rates tobacco could account for more - up to a billion deaths in the 21st century, the WHO says.

Smoking uses up almost 6% of world spending on healthcare as well as nearly 2% of global GDP, according to a January 2017 study in the scientific journal Tobacco Control.

Around the world 4.3 million hectares (10.6 million acres) of land is used to grow tobacco, the WHO says, an area about the size of Switzerland.

Cigarette sales are worth more than $680 billion (€590bn) annually, according to Euromonitor.

China is the leading producer of tobacco, growing about 40% of world's leaves, says the Tobacco Atlas.

Five firms control 80% of the global cigarette market. The top six made a profit of more than $62 billion in 2015, it says.

Smokers get through about 5.7 trillion cigarettes annually, says the Tobacco Atlas. This works out to nearly 11 million every minute.

Filters made from non-biodegradable cellulose acetate have become the type of litter most present on the world's beaches.