This year marks the 100th anniversary of a deadly pandemic.

The 1918-19 influenza pandemic killed an estimated 50 million people, and infected at least one in five of the world's population.

In Ireland, 20,057 deaths were officially recorded.

"We think that a lot more people died because people were dying so fast that doctors just didn't have time to certify the deaths. They were much more concerned with treating the living than filling out pieces of paper for death certificates," she explained.

Dr Milne explained that influenza had not been discovered to be a virus at the time and was understood to have been caused by bacteria. 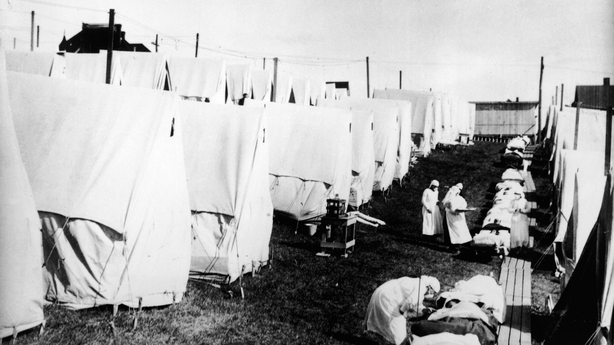 "What they were doing was a mixture of prophylactic, preventative methods and treatments," she said.

"People would talk about wearing eucalyptus on their scarves.

"Whiskey was used quite often as a remedy. Doctors used it in hospitals, as well as people at home.

"You could buy grains of aspirin and things like that to treat it. They also treated it quite a lot with Quinine."

The influenza brought many communities to a standstill.

Dr Milne added: "There would be no commerce taking place. Court cases would be abandoned, schools would be closed. Concerts and things like that would be cancelled. Matches would have been cancelled, the All-Ireland finals were delayed, because everything just stopped. Nobody was well enough to go out and about.

"You get the idea that doctors' confidence in modern science, that their confidence was punctured."