A huge so-called "peace diamond" sold by the government of Sierra Leone to discourage crime-tainted "blood diamonds" has fetched €5.5m, or $6.5m, at auction.

The 709-carat stone, which was unearthed in March, is the largest discovered in Sierra Leone in almost a half-century.

It is between the 10th and 15th largest ever found worldwide, experts say. 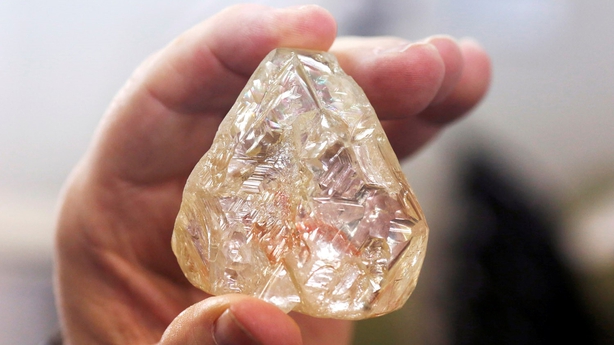 Found by a company led by a Christian pastor, the diamond was given to the government in the hopes it would handle the sale in a way that leaves more profits and development potential in Sierra Leone.

British jewellers Laurence Graff bought the stone, according to Martin Rapaport, whose group hosted the auction. Diamonds fuelled a decade-long civil war in Sierra Leone, ending in 2002, in which rebels forced civilians to mine the stones and bought weapons with the proceeds, leading to the term "blood diamonds".

The United Nations lifted a ban on diamond exports from Sierra Leone in 2003, though the sector is plagued by smuggling.

It was the government's second attempt to sell the diamond after it rejected the highest bid of $7.8 million, €6.6m, at an initial auction in the capital Freetown in May.