In the 1990s he was the burly, brash general leading nationalist Bosnian Serbs towards a seemingly sweeping victory in Bosnia's war.

Two decades later, he was an ailing old man awaiting judgment on genocide charges in a UN court.

Today, a United Nations tribunal (ICTY) in The Hague issued its verdict for Ratko Mladic in one of the highest profile war crimes cases since the post-World War II Nuremberg trials of Germany's Nazi leadership.

Radovan Karadzic, political leader of Bosnia's Serbs in the 1992-95 war, and Serbian President Slobodan Milosevic, who armed and funded Bosnian Serb forces, were tried on the same charges.

The ICTY convicted Karadzic in 2016 and jailed him for 40 years.

Milosevic died in his cell in 2006 before his trial ended.

Defiant until the close of his five-year trial, Mladic was found guilty and sentenced to life in prison for his role in massacres and ethnic cleansing during Bosnia's war.

Prosecutors requested a life sentence for the man who critics called the "Butcher of Bosnia".

His lawyers called for his acquittal and release, arguing he never approved mass killings of Muslim or Croat civilians in Bosnia's vicious, often neighbourhood war and was a victim of Western anti-Serb bias.

Mladic said he wanted to be remembered as a defender of Serbs in a struggle for survival against Muslims dating back centuries, and made urgent by a Muslim-Croat vote for Bosnia's independence from Serbian-led Yugoslavia in 1992.

'The whole world knows who I am'

"I am General Ratko Mladic. The whole world knows who I am," he told a pre-trial hearing in 2011.

"I am here defending my country and people, not Ratko Mladic."

Mladic was charged with genocide for the slaughter of 8,000 unarmed Bosnian Muslim men and boys rounded up in the town of Srebrenica, and his forces' 43-month-long siege of Sarajevo in which thousands of civilians were killed by artillery, mortar, tank and sniper fire from the rugged hills ringing the capital.

From the time of his ICTY indictment in mid-1995, before the war ended, it took 17 years to bring him to trial in The Hague - a testament to the loyalty he inspired among Serbs who helped conceal him and to the resilience of their nationalist cause.

But as Serbia evolved after Bosnia's war from authoritarian rule to democracy seeking integration with the European Union, Mladic lost his sanctuary.

When Serbian police acting on an ICTY arrest warrant finally traced Mladic to a cousin's farmhouse in May 2011, they found a penniless, shambling and ill old man.

The son of a World War II Yugoslav partisan killed in 1945, Mladic was a general in the old communist Yugoslav People's Army(JNA) when the multinational Balkan republic began to disintegrate in 1991 with the secession of Slovenia and Croatia.

When Bosnia's Serbs rose up in response to a referendum for independence by Muslims and Croats, Mladic took over Belgrade's forces in Bosnia which swiftly overran 70% of the country with a combination of daring, ruthlessness and brutality.

Serb paramilitaries entered the conflict with a campaign of murder, rape, mutilation and expulsion mainly against Bosnian Muslims.

Dozens of towns were besieged with heavy weapons and villages were burned down as 22,000 UN peacekeeping troops stood by more or less helplessly, with orders not to take sides.

Mladic had a cameraman film the blitz of the Muslim enclave of Srebrenica, showing him praising his "lads" and haranguing hapless Dutch UN peacekeepers who took his soldier's word that the inhabitants would be safe.

Instead, 8,000 of them were systematically executed in a massacre that took several days in July 1995.

TV footage showed Mladic asserting that he had "liberated" Srebrenica and gifted it to Serbs as revenge against "Turks" who ruled the region when it was part of the Ottoman Empire.

Muslim men and boys were separated from women, stripped of identification then shot. The dead were bulldozed into mass graves.

The remains were later dug up and hauled away in trucks to be better hidden from the world in more remote mass graves.

Over 6,900 victims have since been identified by DNA tests. 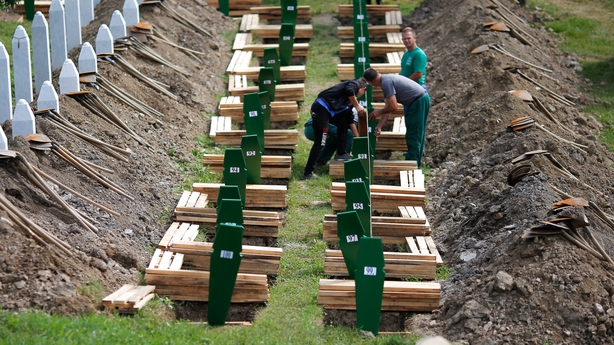 The massacre was the grim culmination of a three-and-a-half year conflict in which the general had pounded Sarajevo daily with the entire Bosnian Serb arsenal, killing over 11,000 people, until local sports fields were overflowing with graves.

His goal, ICTY prosecutors said, was ethnic cleansing - the forcible extermination or expulsion of Muslims, Croats and other non-Serbs to clear Bosnian lands for a "Greater Serbia".

Prosecutors said it was a conspiracy in which Mladic and Karadzic were aided, armed and abetted by Milosevic.

Only a combination of Western pressure and covert American arms and training for Croats and Muslims turned the tide in 1995 against Mladic's army, ultimately depriving it of equipment and fuel supplies from Serbia.

NATO air strikes did the rest.

He spent only half his time at large as a hunted fugitive.

Even after Milosevic fell to a pro-democracy uprising in 2000, Mladic remained well protected in various Belgrade apartments until 2005. He received treatment at a top military hospital.

Sporadic sightings put him at a Belgrade horse race or soccer match.

When finally arrested in the shabby rural farmhouse, he put up no resistance. His right arm was lame, the apparent result of an untreated stroke.

His trial had to be delayed over and over because of his shaky health.

Yet in court, Mladic grinned as a judge read out the charges of genocide, war crimes and crimes against humanity.

Today, during the delivery of the verdict, Mladic was removed from the courtroom when he started shouting at the judges that they were lying.

He was found guilty of genocide and sentenced to life in prison for his role in massacres and ethnic cleansing during Bosnia's war.