There are concerns in rural west Limerick that a proposed bypass of Newcastlewest will have a negative impact on the recently opened Limerick Greenway.

Limerick City and County Council say the bypass is designed to improve traffic congestion in the town, which is on the main N21 route between Limerick and Kerry, and will not impact on the enjoyment of the greenway by locals and visitors.

The 40km greenway - built at a cost of €10 million - has already attracted 250,000 visitors and has opened up major new tourism opportunities for the region.

The council has now identified a preferred bypass route to drive north of Newcastlewest to relieve long established traffic congestion.

But it has causing concern to people on the route who have fears about how their homes and quiet communities will be affected.

In addition, they say they cannot believe this is the route which has been chosen as it goes through the greenway.

As part of the construction of the proposed route, two overpasses creating tunnels along the greenway will be necessary.

People living in Dually, north of Newcastlewest, through which the proposed road will pass, believe it will have a negative effect on the tranquillity and beauty of the area, and ruin the enjoyment of the greenway.

Patrick O'Connor says there is disbelief in the area that this is the preferred route.

"They spent €10m building this fantastic amenity in this green belt of land. And now they want to dig it up again with 75 metre wide overpasses which we believe will dilute its beauty and the great enjoyment people get from it.

"We think NewcastleWest and Ardagh will suffer in particular because people may now begin or end their journeys of the route outside of these areas as the road is being built, and will reverse any of the benefits and commerce connected with the greenway which have come to the area".

The family home of Mairead Haugh Logue dates back 300 years and has seen six generations of her family live there.

She says she is concerned about what the project will it mean for her extended family.

"There are no words to describe how worried we are that this proposed road will divide up our community and run right through the lovely greenway close to our homes, and that the peace and quiet of the area loved by so many people from Newcastlewest and the visitors who come here will be ruined.

"We just cannot see the sense of digging it up again after spending so much money on it," she added.

A petition to support the community's efforts to fight the preferred route has been signed by almost 300 people. 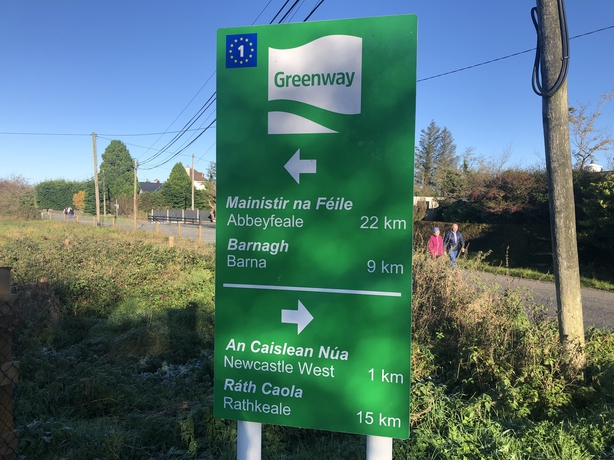 Many living in Newcastlewest and the next big rural town of Abbeyfeale believe that a bypass is needed to relieve serious traffic congestion on the N21.

Limerick City and County Council says the proposed road is expected to have positive benefits on the urban environments of Newcastlewest - as is another bypass planned for Abbeyfeale - and will improve the quality of life of commuters and residents.

In a statement today, the council said it wanted to allay people's concerns about the operation of the greenway following publication of the preferred route.

It said it will continue to work to ensure that the impact on the greenway is mitigated as much as possible with the use of measures such as noise barriers, screen planting, landscaping and any other mitigation measures that might be identified during the ongoing design process.

The council said it is a hugely important amenity for locals and visitors, the enjoyment of which will not be impacted on by the road.

It also said it does not expect the operation of the Limerick Greenway to be interrupted by the presence of the new road as it is planned that the greenway will pass under the road unhindered via two purpose-built underpasses.

Councillor Liam Galvin, former mayor of Limerick and Cathlaoirleach of the Municipal District of Newcastlewest, who lives in the area, said he understands local people's concerns.

Cllr Galvin said he is a major supporter of the greenway and the benefits it has brought to Newcastlewest and Abberyfeale, but he said the council has to find a solution to the serious traffic congestion that exists on the N21.

"It's now impossible to judge the time it takes to travel from Limerick to Kerry because of the serious traffic build ups on the N21 in the towns of Adare, Newcastlewest and Abbeyfeale.

"Businesses have said it to me, and if we want to attract new industry to the area, then there has to be a route which avoids the congestion going through these towns."

Cllr Galvin said tunnels and overpasses are already a feature of the greenway and have not spoiled the enjoyment and attraction of this major tourist amenity in the region.

The preferred route is on public view on the Limerick council website and local people have until 7 December to make their observations and opposition known.