A "meaningless" Irish name has been assigned to a new social housing estate in Dingle in west Kerry, a region where the protection of the Irish language is a key objective of development plans.

Locals say greater care should have been taken in a town where Irish is of such importance.

The name is meaningless and incorrect in terms of grammar and spelling, according to locals and scholars, who are urgently pressing Kerry County Council to correct the error in what is a Gaeltacht town.

Chief Placenames Officer Dr Pádraig Ó Cearbhaill has described the naming of the estate as shameful.

The name was put forward in a list of names by architects in May 2018 as part of the original application to facilitate connection with the ESB and it was chosen and approved by the council planners.

It is not the first time a heated row has erupted over a place name in Dingle.

A 2004 Placenames Order by then minister Éamon Ó Cuív removed the name Dingle as an official name, replacing it with An Daingean, which locals said was meaningless.

The move sparked fury and a lengthy campaign, including a plebiscite in 2006, to reinstate Dingle alongside Daingean Uí Chúis. 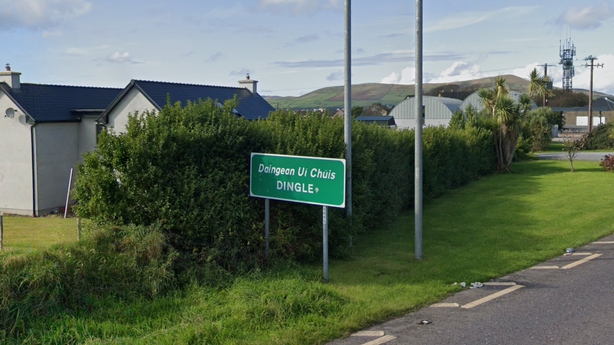 It was some time before the order was overturned and Dingle was officially replaced on road signs.

The tenants for Pairceanna na Glas have been allocated from the council housing list.

However, the name stone has now been erected, and it lacks the requisite fada in "páirceanna", they told the Irish language programme An Saol ó Dheas on RTÉ Radio na Gaeltachta.

Dr Ó Cearbhaill said the name has no meaning and is ungrammatical.

Sinn Féin TD for Kerry Pa Daly said the choice of name was absurd, telling An Saol ó Dheas that it was clear that Kerry County Council had a lazy approach to the Irish language.

Mr Daly said he had been in contact with the local authority and was confident that it will change the name.

"If they didn't change it, it would be like an open wound in Dingle," he added.

Local GP Dr Peadar Ó Fionnáin said no one is really sure what "glas" means in the context because of the poor grammar and locals should have been consulted by the council.

"It is vitally important to involve locals in housing and town planning," he said.

"It is unfortunate that a Gaeltacht town should have such an awkward misnomer, and the name needs to be changed as it doesn't reflect the active use of Irish in our community.

"I would call on Kerry County Council to consult local residents and experts for better suggestions as a way to include the community and also draw on local knowledge of the area."

The local name for the field was "Gort Mór" .

Kerry County Council has said it is now in talks with housing agency Clúid to seek to change the name.

Yesterday, Clúid said it "will examine the issue further".