Wreaths were laid in Croke Park this evening by the President Michael D Higgins, the Taoiseach Micheál Martin and GAA President John Horan, to mark the centenary of Bloody Sunday.

It is one of many commemorative events that are being held this weekend to mark the 100th anniversary of Bloody Sunday.

On 21 November 1920, 14 civilians were shot dead in Croke Park by British forces following the killing of British intelligence agents by the IRA earlier that day.

The football teams of Tipperary and Dublin were playing in a challenge match at the Dublin venue in 1920 when crown forces arrived and proceeded to open fire.

Dublin had the names of the 14 people killed within their jersey, as well as a special logo and the number '14' on the sleeve, for their Leinster decider with Meath tonight.

It's Leinster Football Final day, as we mark the 100th Anniversary of Bloody Sunday 💙#UpTheDubs pic.twitter.com/JaDdhrO6O5

Meanwhile, Tipperary changed their appearance completely for the one-off occasion.

In 1920, the team was wearing the white and green jerseys of local club Grangemockler for the challenge against Dublin.

Tomorrow, their footballers will line out against Cork wearing replica jerseys, which include the date of the tragedy, as well an image of the face of Michael Hogan, who was from Grangemockler.

He was playing for Tipperary that day and was one of the 14 killed by the British forces.

A statue of Hogan is also being unveiled in his home village this weekend. 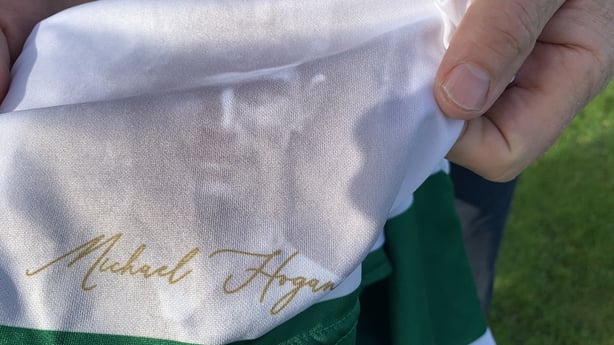 "It's a very poignant time," his grand-niece Louise Hogan said.

"We're looking back over the course of a century at the heartbreak that one family experienced, in our case, but that many families experienced all over the country.

"The recent events to commemorate Bloody Sunday show what a symbolic day it was in the War of Independence."

Conor Shelly of Grangemockler GAA, whose great-grandfather Jerry Shelly was playing for Tipperary that day in 1920 and captained the county two years later when they won the delayed All-Ireland, said it's "an emotional time" for all the families.

"I think it's something nice to do, to commemorate the event," he said in relation to the replica jersey.

"It's a long time since the colours were worn by Tipp so it's a big event and will be great for the club and for the area, it's nice to see your own colours being represented out there."

PJ Lanigan's grandfather, Dick Lanigan, also played that day and still has medals won by and presented to his ancestor.

"We have the 1922 All-Ireland medal ... the 1922 Munster medal, and the 1921 Bloody Sunday medal, a very special medal which was presented for the year anniversary after Michael Hogan was killed. In the medal you can see a gentleman in the old GAA attire, and he's holding a gun."

Michael Murphy of the Grangemockler GAA Club said it will be "wonderful" to see the white and green colours being worn by the county team, and added that they hope to use them again in the near future.

He said: "The under-21s are in the county final, that was to have been played in November, and we're hoping that we can wear those same jerseys in that county final in a couple of weeks' time."