A man who attempted to poison a co-worker with a lethal chemical after he heard of the substance on an unsolved crimes show has been jailed for a year.

The Circuit Criminal Court in Cork heard that on 23 May 2018, Thomas Lynch got a chamois cloth and placed the substance, thallium, on the car door handle of his co-worker Owen Sheehan.

The pair had had a workplace disagreement at Iron Mountain data management company in Carrigtwohill, Co Cork.

In extreme cases death can be caused by swallowing thallium.

Arising out of its use over the years for murder, thallium has gained the nicknames "The Poisoner's Poison" and "Inheritance Powder."

Detective Garda Cormac Ryan told the court that Lynch put an unknown quantity of the substance on the car handle of Mr Sheehan's car.

He said that Lynch told colleagues that he planned to put a liquid on Mr Sheehan's car which could cause him death in 24 hours.

Lynch was observed going to the side of the car wearing gloves and with a cloth. Another employee reported his actions to his superior. Mr Sheehan told the court that he tried to wash the substance off.

Gardaí were called in and a search warrant was obtained for Lynch's home. No poison was found at the remote property where Lynch lived alone.

Det Gda Ryan said that when Lynch was arrested he directed gardaí to Ballinaclash Woods, 10 minutes from his home. When they went there, Lynch brought them to a hole in the bark of a tree where gardaí found a bottle containing the substance wrapped up in cotton wool.

It was sent to the Forensic Science Laboratory for analysis where it was found to be thallium. 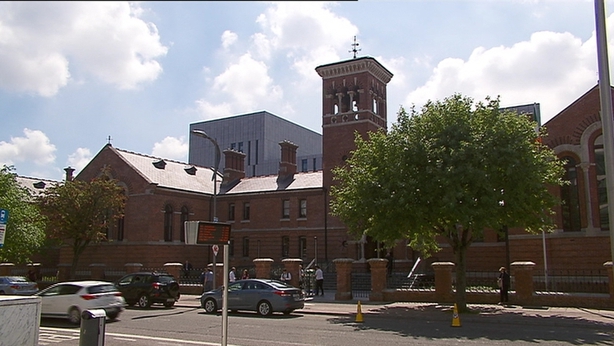 Lynch told gardaí that he imported a vial of the substance from Italy for €70 to €80, having watched a programme called "Unsolved Crimes" on television.

He stated that he and Mr Sheehan had had a disagreement over the breaking of a pallet truck.

Det Gda Ryan said the substance was "highly toxic". However it is only lethal if ingested or swallowed. The vial was around five to eight centimetres long.

He said Lynch had not come to garda attention since the day of his arrest. He has two previous convictions for drugs offences dating back 20 years.

Det Garda Ryan said that he was apprehensive about any future contact between Lynch and Mr Sheehan. He asked Judge Seán Ó Donnabháin to consider ordering Lynch to desist from indirect or direct contact with the victim in the case.

Tim O'Leary SC said Lynch had been employed by Iron Mountain for 11 years describing his behaviour as "out of character".

He co-operated fully with gardaí and entered a guilty plea at the earliest opportunity.

Lynch's barrister, John Devlin, said his client had lost his father at the age of 14 and his mother died last October. He conceded that it was a serious offence, but said Lynch had an unblemished work record.

He said the offence stemmed from a "delusion" of Lynch's, that Mr Sheehan had interfered with a truck pallet and his work desk. He spoke of the poisoning being an immature act.

In an emotional victim impact statement, Mr Sheehan said he had been employed by the company for 14 years.

"The accused, Thomas Lynch, was employed there for much of that time. I had always been nice to him in the past and had obliged him in many ways," he said.

"On the day this incident occurred I had been informed by staff that the accused had placed a substance on the door handle of my car. I always sat in my car to have my lunch alone. When this incident had come to my supervisor and manager's attention, I was told to go and wash my car door.

"When I realised the seriousness of what was happening it was too late. I feel that both my supervisor and my manager handled this badly.

"When I realised the nature of the toxic substance that the accused had procured and that it could have caused death it really shook me. It terrifies me."

Mr Sheehan said the event had brought about havoc in his life.

"I have gained two stone since this incident due to comfort eating to feel better. I suffer anxiety. I must attend a counsellor once a week and the Mercy Hospital once every two to three months.

"I continue to take medication which I hoped I could be finished with. I also need medication to help me sleep. I have developed severe heartburn.

"I have had weeks worth of nights where I have had nothing but extremely vivid and extremely bad dreams and nightmares. I believe my life will never be the same again."

Mr Sheehan said that he felt unable to tell anyone what had happened, leaving him "very vulnerable".

Mr Sheehan added that the case had had a detrimental impact on his home and work life. He estimates that it has cost him in the region of €6,000 in lost overtime and counselling costs.

"All of this had taken a huge toll on my partner, even though she has always been supportive of me. Since the crime I have had problems concentrating, especially in college.

"When driving I am always nervous that someone is following me. I have withdrawn from social events on outings. I have not returned to work since March 27th, and have missed college lectures and labs.

"I lost my bonus as a result of the events and I had stopped doing overtime.

"I never thought Thomas Lynch would be capable of doing something as bad as this. I don't know if he realises how he has damaged my life with fear and anxiety."

He thanked Garda Ryan and Support After Crime for their support in the wake of the incident.

Judge Ó Donnabháin asked Mr Sheehan if it had been explained to him that thallium only becomes fatal if ingested or swallowed. He said that gardaí had informed him of this in a bid to allay his fears.

The judge said that it was "a most unusual and frightening case".

He said Lynch had imported the substance which he knew "had the potential to do damage to the victim".

He added that Lynch had shown "an element of preparation and determination" in sourcing the lethal substance and then applying it to the vehicle. He noted the huge impact of the case on the victim.

Given the level of garda co-operation, he jailed Lynch for two years, suspending the final 12 months of the sentence.

Lynch will be supervised by the Probation Service for three years following his release from custody. He was also ordered not to have any direct or indirect contact with Mr Sheehan.