A rare 19th century Irish manuscript has been discovered in west Kerry.

The 27-page manuscript contains a complete version of the epic poem or lay known as 'Eachtra an Amadáin Mhóir' [The Adventure of the Great Fool], which is sometimes associated with the Fenian tradition.

The manuscript also holds another another poem composed by Muircheartach Ó Gríobhtha in praise of a doctor.

The manuscript was compiled in 1857 by Tomás Mhicil Ó Muircheartaigh, a small farmer who lived in Baile an Fheirtéaraigh.

Relatives of the scribe discovered the manuscript in an old trunk, where it was hidden inside an old copy of the Annals of the Four Masters. 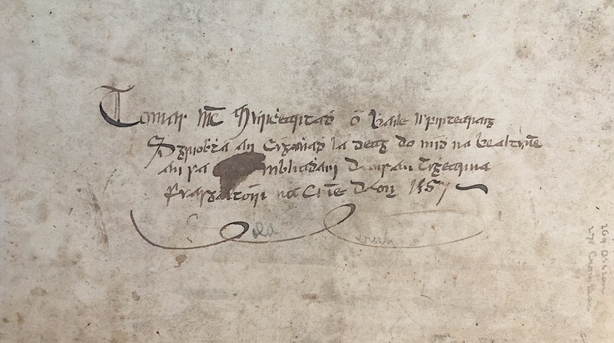 Although Tomás Mhicil purchased his copy of the annals over 160 years ago, a story about the book has survived in local folklore and adds greatly to the value of the discovery of the manuscript contained within it.

It is said that in 1857 Tomás Mhicil walked a cow nine miles from Baile an Fheirtéaraigh to the fair in Dingle.

He sold the cow and with the money received he purchased the expensive copy of the Annals of the Four Masters.

The purchase was a source of great wonder and surprise in west Kerry as the area was still recovering from the trauma of the Great Famine.

For years Tomás Mhicil’s book was believed lost until it was found by the Ó Cinnéide family.

Both the book and manuscript are inscribed by Tomás Mhicil Ó Muircheartaigh and dated 24 January and 15 May 1857. 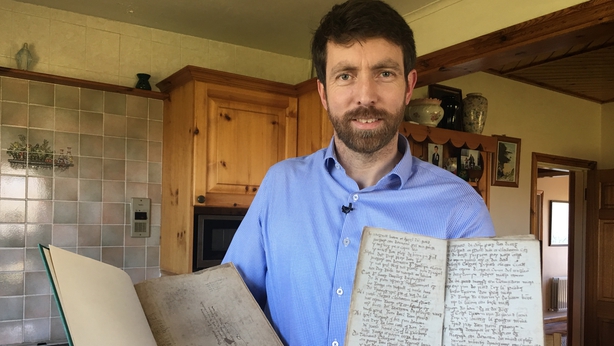 Ruairí Ó Cinnéide says it was a fantastic discovery.

"We found this big old trunk in the old house and when we opened it we saw the book," he said.

"But then when we inspected the book a manuscript fell out. The script is absolutely beautiful, so artistic. The pages are held together with a small steel nail. Tomás Mhicil must have put it there himself."

Dr Tomás Ó Murchú, from the Department of Irish at Maynooth University, says the manuscript is of tremendous importance.

"There are over 180 verses in the version of Eachtra an Amadáin Mhóir contained in this manuscript. That in itself is unusual as in the most complete versions which have survived you normally only find 160 to 170 verses," he said. 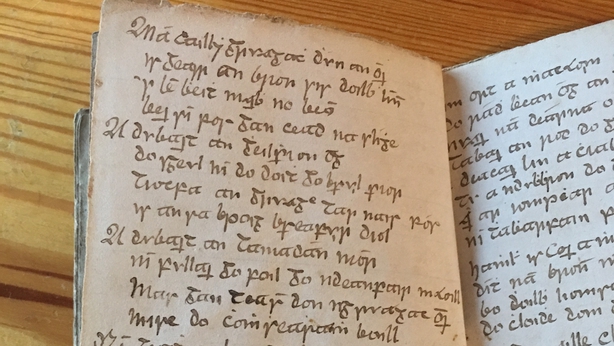 Dr Ó Murchú said the other eight verse poem in the manuscript is of special interest.

He said: "The poem is accentual in composition and appears to date from the 18th century or possibly even earlier. It is a blessing composed by a Muircheartach Ó Gríobhtha and is addressed to a doctor.

Mary Ellen O’Shea, who was born and reared in Baile an Fheirtéaraigh, says she often heard her father talking about Tomás Mhicil and the book.

"It was said that Tomás had a great hunger for books. The poor man didn’t have much, a very small farmer, a few cows and a little cottage," she said.

"My father told me that Tomás Mhicil walked the cow all the way in to the fair in Dingle. He sold the cow and with the money he went to a bookshop and bought the famous book.

"The whole place was talking about it, the madness of it, the people didn’t have much. But Tomás had such love and respect for learning he had to buy the book."

The Ó Cinnéide family is now offering to donate the Tomás Mhicil’s book and manuscript to the local museum in Baile an Fheirtéaraigh.

"We realise the importance of this book and manuscript. There is an amazing story behind it. The story of Tomás Mhicil and his cow is very much part of the parish’s story and we feel it is only right that the community would have the opportunity to see and enjoy both the book and manuscript," Ruairí Ó Cinnéide said.