A four-year-old boy and his twin sister have been honoured at their school in west Cork for saving their grandmother's life.

Seán and Emma O'Sullivan from Clonakilty were being looked after by their grandmother Ruth Clarke recently when she became unconscious.

Seán found his grandmother's phone and called his mother and his grandfather.

The twins' parents were away on a short break, but their grandfather Stephen was close by.

When he arrived at the house, Seán managed to unlock the front door to let him in to attend to his grandmother, who was still unconscious.

This morning, at Naíscoil Chloch na gCoillte, which Seán and Emma both attend, bravery medals were presented to the twins by Clonakilty Mayor Greta O’Donovan and Dr Jason van der Velde of West Cork Rapid Response in recognition of their bravery and quick-thinking.

The twins' parents and grandmother were also at the event. 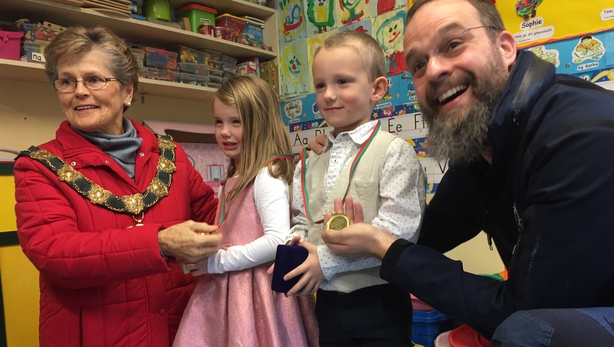