Thousands of people turned out in Limerick city centre tonight for the switching on of the Christmas lights which kicks off the festive season in the city.

CervicalCheck campaigner Vicky Phelan, along with members of her family, switched on the lights in front of a huge crowd at the top of O'Connell Street.

Ms Phelan said it had been an amazing year for her and she did not think she would be here to switch on the city lights at Christmas time.

She said it was wonderful to be there for her children Amelia and Darragh and husband Jim. 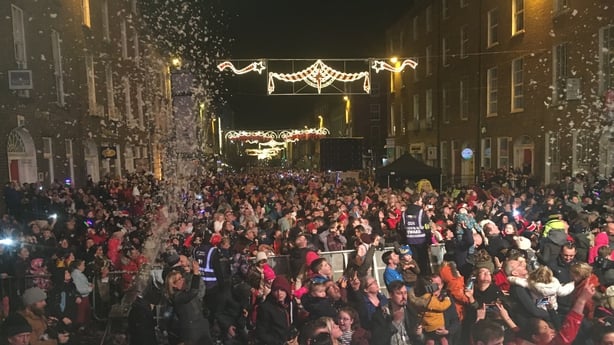 She wished everyone a very happy Christmas and said it was a very important time for families to spend it together.

Mayor of Limerick James Collins said The 'Light Up Limerick' event kicks off the month-long festive season of busy commercial activity in the city at the end of what has been a phenomenal year for Limerick with the winning of the All Ireland hurling trophy.

The festive activities include the arrival of Santa at King John's Castle; a gingerbread factory and Santa's postbox at the Hunt Museum.

There will also be artisan traders for Christmas at both Cruises Street and the Limerick market.

Free park and ride hubs will be set up at the Cleeves site on O'Callaghan Strand, at Limerick City Council car park, and at the Irish Rail depot in Roxboro to make it easier for shoppers to park and walk to the city during the festive season.