It follows a call from the Irish Society for Colitis and Crohn's Disease, the national charity for people with inflammatory bowel disease, to introduce the new signage in Ireland's airports, rail stations and service stations.

The new signage was introduced last month and reminds people that some people who need to use accessible toilets may not show any physical signs of disability. 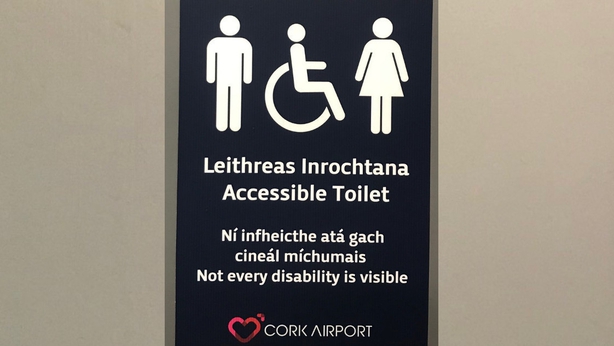 Speaking on RTÉ's Morning Ireland, she said the disease made travel extremely challenging and when she has been forced to use an accessible toilet, she has encountered public hostility.

"You get an awful lot of looks, there is a lot of stigma there, people will say things … maybe not directly to you … but they'll say it to make sure you can hear it, so I think the new signage is going to be really, really good and I hope people will sign up to it."

Fergal Troy, who has ulcerative colitis and is also on the Board of the ISCC, said the society was in touch with other travel hubs about the idea and were receiving positive feedback.

Mr Troy said they were targeting travel hubs first, but are hopeful it will have a trickle-down effect to other business.

In a statement, a spokesperson for Cork airport said it was "extremely conscious that the way an airport treats its disabled passengers is one of the most important qualities by which they are judged.

"We are delighted to be playing a role in highlighting the need for airports to recognise, not just passengers with obvious needs, but also those of our guests with hidden disabilities," they said.