Planners in Clare County Council have granted permission for coastal erosion management works at a golf course owned by US President Donald Trump.

Trump International Golf Links (TIGL) sought permission to carry out works around the resort in Doonbeg.

The application to Clare County Council envisaged the construction of two new structures at dunes bordering the links course.

This will involve the use of backstops to prevent further erosion, which would run for around 1km in total, on two stretches of coastline to the west of the property.

"As per the provisions of the planning acts, any decision made may be subject to a First or Third Party appeal to An Bord Pleanála within four weeks of the decision date."

In a statement, the hotel management said the decision demonstrated a commitment to support local business and safeguard the economic future of the region.

It said the approval cleared the way for plans to protect and expand facilities at the golf resort over the coming years. 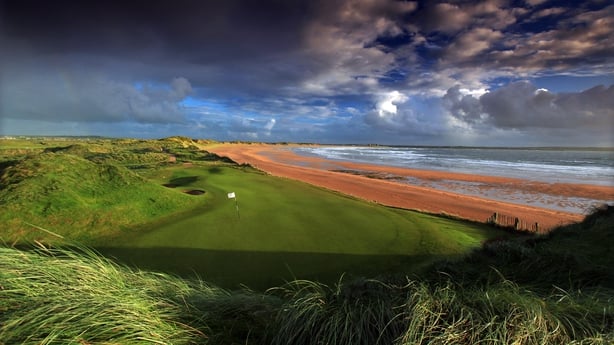 Trump Hotels estimates that between 15 and 20 metres of dune facing the edge of the golf course has been eroded since 2002.

Last year, controversial plans for a 4.5m high rock wall, running 2.8km along the beach, were abandoned in favour of the revised proposal.

In the latest application, TIGL said that excavated sand would be stored for "replenishment and future site management".

It said the structure would be "screened from view".

Several objections had been lodged to the application on environmental grounds.

An Taisce said it regretted the decision to grant permission but it would wait until it had a chance to study the details tomorrow before deciding on an appeal.

The Green Party has expressed disappointment at the decision, with party leader Eamon Ryan saying it was considering an appeal to An Bord Pleanála.

He said: "This was always about protecting the dune ecosystem and the ecology of this most sensitive coastline site.

"Building a barrier in the middle of the beach is going to change the whole way the dune system works.

"This should have been about trying to get the golf course to evolve to the changing dune system and not destroying what is a natural process.

"We very much understand that there are a lot of local jobs involved from the golf course but we believe that they could be protected by working with nature rather than trying to control the natural system."

Speaking on RTÉ's Drivetime, Mr Ryan said it was good news for the region, saying there was extensive damage being done by coastal erosion.

He said he believed the Trump family had been good for the region, saying the business was bringing jobs and sustaining tourism in Doonbeg.