Two rowers had their world record attempt to row across the Atlantic cut short when their boat overturned about 300km off the coast of Cork this morning.

Brian Conville, 25, from Raheny, Dublin, and Joseph Gagnon, 20, from Canada were on schedule to become the first pair to row the Atlantic - west to east - from Canada until their ocean rowing boat overturned at around 2am in the morning.

The men were due into Crookhaven in Co Cork on Sunday night or the early hours of Monday morning before the accident happened.

The pair had left the port of St John's in Newfoundland, Canada, on 13 June and had planned to row across the Atlantic without a stopover and without assistance.

They had planned to complete the crossing in less than 40 days. 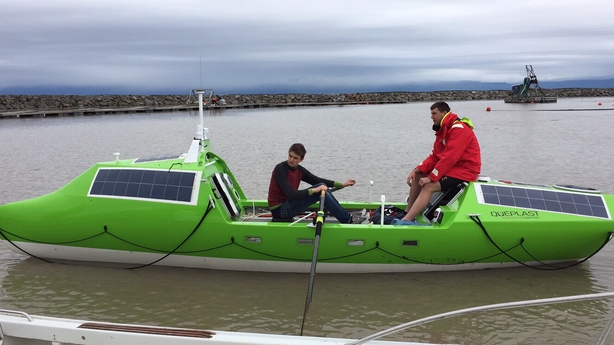 The emergency services were contacted after the Emergency Position Indicating Radio Beacon (EPIRB) on board the boat activated and the Coast Guard station based at Valentia, Co Kerry, coordinated a rescue operation.

Valentia tasked the Coast Guard helicopter Rescue 117 and the Air Corps Casa plane to go to the scene.

They arrived on the scene shortly after 2pm this afternoon and found the two men lying on the hull of their upturned boat.

The Coast Guard said the men were taken on board the helicopter during a difficult operation with a three-metre sea swell.

The Casa provided 'top cover' as well as a communications platform back to the Coast Guard station at Valentia.

The men were taken to University Hospital Kerry for treatment.

Although suffering with mild hypothermia, the men have been described as being in good spirits.

Gerard O'Flynn, from the Cast Guard said: "It highlights that if you can raise the alarm and stay afloat then you stand a very good chance of being rescued.

"I also want to compliment the helicopter crew and Valentia [station] on a very successful operation and thank the Air Corps for their support."

A spokeswoman for the Ocean Rowing Society said: "They are OK. They are safe. That's the most important thing.

"But it is such a shame really, only 160 or so miles from Ireland.

"Whoever tries to row an ocean, first of all they must be a great person. I believe both of them did their best."