Six units of Cork City Fire Brigade are fighting a blaze in the former Our Lady's Hospital on the Lee Road in Cork.

The building is derelict and is believed to have been unoccupied, and firefighters do not believe the public is at risk.

The alarm was raised just after 8pm this evening.

Damage to the former Our Lady's Hospital is extensive, although @CorkCityFire doesn't believe it poses a risk to the public. @rtenews pic.twitter.com/6TkB2IN3Nd

The multi-storey Victorian building has been subjected to many attacks of vandalism.

The roof of the building was ablaze when the fire service arrived. 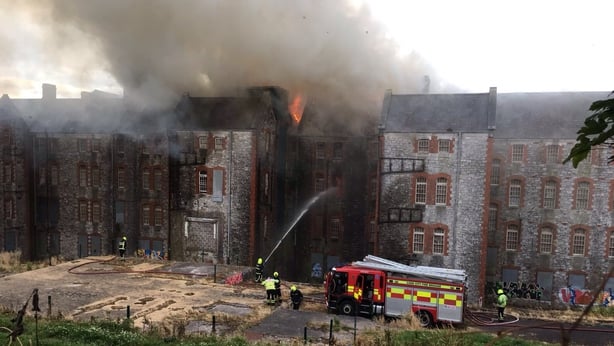 Firefighters are tackling a blaze at the former Our Lady's Hospital on the Lee Road in Cork https://t.co/UzwQkHG1EM pic.twitter.com/OCu3qLn5Oa

More than two dozen fire fighters are fighting the blaze using three water tenders, a platform and two water tankers, one of which was brought from Mallow.

The fire in the main part of the roof has been extinguished, but fire continues to burn at the front of the building.

Smoke is visible for several miles.

Firefighters have not entered the building because of its condition.

The operation to dampen down and extinguish the blaze is expected to continue for several hours.