The retired Archbishop of Dublin Diarmuid Martin has said "the Church way out-stepped its role and became a controlling church" in relation to how women and children were treated in mother-and-baby homes.

He said this was something that was less likely to happen today.

Speaking on RTÉ's Drivetime, Archbishop Martin said those involved in the abuse, documented in the commission's report, "betrayed vulnerable women, they betrayed themselves and their calling and they betrayed the caring message of Jesus Christ".

He said "that should not have happened and there's no half-way of interpreting reality to try and justify that".

He said he believes the Church and the Religious Orders should apologise for their role in this.

Archbishop Martin said what he has been trying to do is to listen to the survivors who have been speaking. He said while this may be an investigation into what happened in the past, "they [the survivors] live in trauma still today".

He said he also asks himself "what went wrong on my church that allowed such a situation to continue?".

"Church-run institutions should be places where people experience the warm embrace of Jesus Christ, as particularly vulnerable people, not harshness, judgementalism and disrespect. And there's so much of that in the story."

He said what happened in the mother-and-baby homes was only one chapter in a shocking narrative that has gone on for some time. 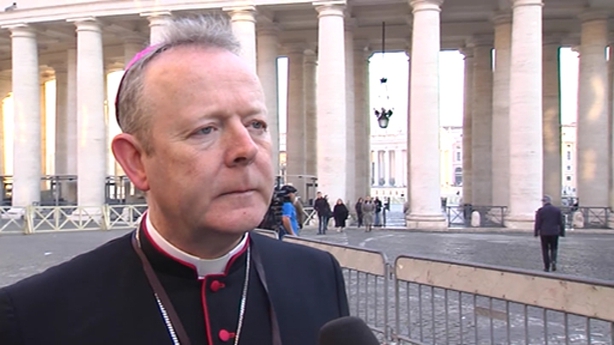 Archbishop of Armagh and Primate of All Ireland Eamon Martin has welcomed the report, saying that as a Church leader he accepts that the Church was "clearly part of that culture in which people were frequently stigmatised, judged and rejected."

He said he "unreservedly" apologised for that and "for the long-lasting hurt and emotional distress that has resulted".

"All burial grounds should be identified and appropriately marked so that the deceased and their families will be recognised and never be forgotten."

#Archbishop Martin said the the Church "must continue to acknowledge ... its part in sustaining what the report describes as a "harsh … cold and uncaring atmosphere".

These witnesses have "shown determination in bringing to light this dark chapter in the life of Church and society," he said.

"We owe it to them to take time to study and reflect on the findings and recommendations of the Report, and commit to doing what we can to help and support them," he said.

He also appealed to anyone who has information about burial grounds to come forward.

"All burial grounds should be identified and appropriately marked so that the deceased and their families will be recognised and never be forgotten," he said.