The first cartons of goat's milk have come off the line at the Glenisk plant in Co Offaly this morning, the company's commercial director has said, following extensive damage to its facility earlier this week.

Speaking on RTÉ's Countrywide programme this morning, Emma Walls said that after a "very dark week" there was now "a lot of hope there".

A fire which broke out at the factory in Killeigh, Co Offaly at around 11am on Monday caused extensive damage at the facility.

No injuries were reported after all 50 staff got out safely.

Glenisk Managing Director, Vincent Cleary said there has been no conclusive result on the cause of the fire.

Speaking on RTÉ's Brendan O'Connor programme, Mr Cleary said forensic examinations have been carried out, and more detail is expected on Monday.

It is possible that the cause of the fire could be linked to old wiring, he added.

Mr Cleary said the company is using the milk bottling plant on the same site, which was untouched by the fire.

"We are coming up with a plan and we are confident by 1 January, we won't have the full suite of products, but it will be a start. Using the small bottling plant as our core manufacturing base and some temporary buildings as well and we'll get started again."

Reflecting on the "dark day" the fire occurred, he said it was a "Notre Dame" moment "watching it go up in flames", with "very little anyone could do to stop it".

He believes the fire started in one small room, adding that it was "the only room that was unoccupied".

Mr Cleary described how around 50 workers were inside the factory when the alarm was raised, and said handbags and car keys were left behind as they thought it was "just another drill".

"This time it was for real," he said. 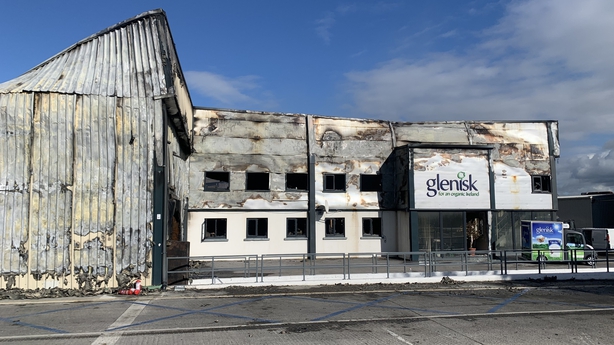 He referred to "a few brave souls" who went in search of the fire, and tried to fight the blaze with fire extinguishers.

"They said it was intense... they were beaten back by flames and toxic fumes."

He said the fire spread fast through a "series of small rooms" and the factory "went up like a box of matches", but which time it had become a "containment exercise".

In relation to the future of staff at the plant, Mr Cleary said they will not be let go if he can prevent it.

"We are fighting for our staff," he said.

Ms Walls said they still do not yet know what caused the fire, with different investigations ongoing into the matter.

"Our focus is on what we can do to get back up and running," Glenisk commercial director, Emma Walls added.

"The incredible Glenisk team have spent the week getting power and water to that unit and just after 7.30am this morning the first cartons of goat's milk came off the line," she said.

"It is one of those products people depend on because they may have dietary needs.

"We've lots more organic packed milk than we would normally have because we are diverting organic milk into cartons rather than into yoghurt".

"We're really keen that we manufacture product as soon as we can so we're focused on getting yoghurt manufacturing up and running, and there is a plan in place.

"After a very dark and difficult week, there's a lot of hope there," she added.

'The cows and goats are still milking, our staff are still working, everybody's being paid, we're fighting for our staff and our farmers, they depend on us and we depend on them'

"The main thing is that we're taking the milk. It's very important that farmers feel reassured at this time. We've worked so hard to build organic supply, and while it can't go into yoghurt in the immediate term we are going to continue to collect it, we are going to continue to pay for it, we will divert what we need to in the very short term, but we are planning to be back on the shelves with yoghurt on the first of next year," she said.

"Nobody is wringing their hands or looking backwards at Glenisk, we're looking forward and rolling up our sleeves to get back up and running as soon as we possibly can," she added.

Asked about the effect of the fire on staff, Ms Walls said everybody was still "devastated".

She said however that all members were back at work, adding that: "Glenisk is not just bricks and mortar, it's the people who work there and the farmers who supply it".

"On a very dark day on Monday all of the staff walked out of that building and they were safe. They are the people who are going to help us rebuild.

"The cows and goats are still milking, our staff are still working, everybody's being paid, we're fighting for our staff and our farmers, they depend on us and we depend on them," she said.