The Government has announced a €7m protection scheme to save the coastline in the Rosslare are of Co Wexford from erosion.

However, a timeframe for the start and finish of the project has not been finalised as it has to go through the design and planning phases before work can begin.

Rosslare Strand and nearby stretches of the southeast coast have suffered from longshore drift erosion for years, with sand getting swept away particularly in times of storm and high winds.

The protection scheme will consist of rock groynes - structures built perpendicular to the shoreline - and rock revetment to protect against wave action as well as beach "nourishment" measures. Flood defence work will also be built onshore.

Approval of the funding for the project was announced in Rosslare today by Minister of State with responsibility for the OPW Patrick O'Donovan who said that the work is "long overdue" and described it as "a massive scheme" for the region. 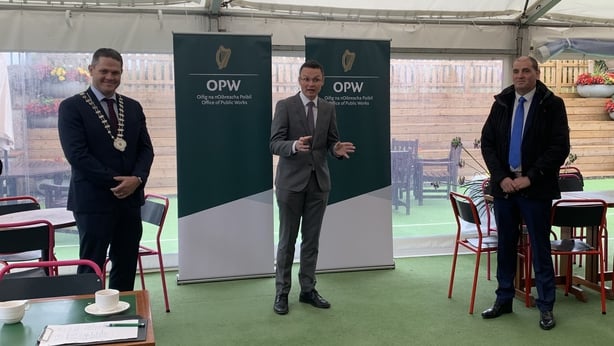 "An awful lot of sand has been washed away here over the years and I suppose not only has it put at risk properties, but it has also reduced the amenity, so we want to protect the beaches", he said.

Asked for a timeframe for the project, he said that it first has to go through the design and planning processes before work by the OPW and Wexford County Council can start.

"I'm not in this job a long time but one thing I’ve learned from my predecessor and others is that you don’t give timeframes," he said.

"Purely because if the timeframe isn’t met, we know what happens, but what we do within the Office of Public Works and the department is that we’re committed to putting as much energy behind it as possible, so that with Wexford County Council we’ll see work commencing here as quickly as possible."

He also said that the Rosslare scheme is part of a €1bn investment by the Government in flood and coastal protection works nationwide.

Chairman of Wexford County Council Ger Carthy said the news is "momentous" for Rosslare and Wexford and that the coastal protection work "has been in the melting pot for a long time," awaiting approval.

"I look forward to the commencement of the work and the design and planning phase of it".

Owner of Kelly’s Resort Hotel, which fronts onto the beach at Rosslare Strand, Bill Kelly said that erosion has been "a huge concern" for years.

"The beach is disintegrating before our eyes in the last number of years," he said.

"It’s a must for us in the hotel business. We employ 220 people along the coast, right on the beach, without the beach we’re nothing. We can’t continue to exist. It is vital. Today’s announcement is a huge bonus for the area."

Asked about the lack of a definitive start and end date for the project, Mr Kelly said: "I can imagine it needs to go through the process and the planning process and I guess the first thing is the money is in place and we can try to push the rest through as quickly as possible."

Chief executive of Wexford County Council Tom Enright said it’s "a great day for Rosslare to see this project moving forward," as the area is one of the premier tourism spots in the whole country.