A number of houses at Bray Head in Co Wicklow have been evacuated as firefighters tackle a gorse fire in the area.

The Irish Air Corps has resumed its aerial firefighting operation in the area, after it had suspended its operation at the fire because of drone use in the area.

It has been involved in fighting the extensive fire since this afternoon using an AW 139 helicopter to lift tonnes of sea water on to the burning hillside.

At around 4.45pm, pilots noticed drones in the sky close to where they were operating, which rendered it unsafe for them to continue and the helicopter returned to base.

A spokesperson for the Air Corps appealed to drone owners not to fly in the area as drones are an extreme hazard to the aircraft.

The fire started around 1am in front of a tent and spread from there.

The fire has also hit rail services in the area, as Iarnród Éireann suspended services between Bray and Greystones due to the blaze. 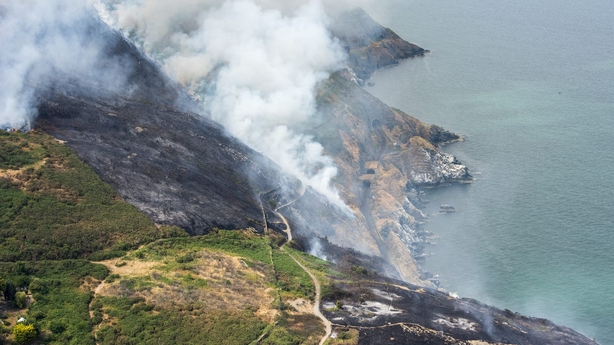 The line will remain closed between the two Co Wicklow towns for the remainder of the day due to fire damage to signalling and telecoms cabling.

Rail tickets to and from Greystones will be accepted on Dublin Bus.

The fire is under control but damage has been caused to the rail infrastructure, according to Wicklow Fire Service.

The Defence Forces  said that Air Corps helicopters have made around 500 water drops to tackle wildfires over the last two weeks.

Air Corps helicopters have responded to requests for assistance in Cork, Limerick, Offaly, Wicklow, Dublin and Armagh, dropping more than 620,000 litres of water.

The Defence Forces said it is on stand-by and remains prepared to assist firefighting operations.