An excerpt from 'It would be a great pity if Collins were killed' - a long read by Shane McElhatton, Series Editor, Decade of Commemoration

Michael Collins had been in Cork since 20 August.

The next day, he decided that on Tuesday 22, he would inspect Army positions across West Cork, all the way from Cork City to Skibbereen and back.

In the end, it turned into an awkward mix of emotional reunions with family members, and hard-headed huddles with Army officers across the region.

Orders were issued for the convoy to be ready to leave at 4am. The convoy left the slumbering city, heading westwards for Macroom.

Progress was slow, due to so many bridges on the main road being blown up. Incredibly, no one in the convoy was familiar with the roads between Macroom and Bandon, so a local man was persuaded to join them as a guide.

But even he needed to ask directions when the convoy arrived at the crossroads at Béal na Bláth.

They stopped at Long's Public House to ask directions. At this point Collins was spotted in the back of the Leyland by an IRA lookout, Denis Long.

By complete co-incidence several IRA officers and men retreating from the fighting in Limerick and Buttevant had arrived at Béal na Bláth the previous evening and had established a headquarters in a farmhouse near the crossroads.

Denis Long went to the farmhouse with the scarcely believable news that the Commander in Chief of the National Army had passed less than a mile away.

An ambush is planned

General IRA policy was to attack Free State convoys wherever possible. It was decided by the officers in the farmhouse that an ambush would be set at Béal na Bláth in case the convoy returned the same way later on 22 August.

Liam Deasy, Officer Commanding the First Southern Division, had arrived at the farmhouse. With him was Éamon de Valera, who was trying to get from West Cork to Dublin. Deasy had agreed to accompany him as far as Béal na Bláth.

De Valera was by this time in the Civil War still respected, appointed as a staff officer to the Commander Liam Lynch, and active in that role on the front lines across the battlefield.

But he was also isolated and out of favour with the IRA leadership for his growing conviction, which he did not hide, that with the fall of Cork and all other towns in Munster, the time had come to end the fighting. He was appalled at the destruction caused by the fighting and the scorched-earth tactics of the IRA.

On his journey towards Dublin, he had tried to engage the IRA Commander in Chief Liam Lynch in the debate. Lynch gave him short shrift, and was so concerned about his loss of faith in the war, that when de Valera left his headquarters to meet Deasy, Lynch sent a warning ahead to Deasy not to encourage or listen to him.

When de Valera arrived at the farmhouse with Deasy, he was told an ambush was likely if the convoy passed that way again.

Deasy recalled that de Valera's response was: "It would be a great pity if Collins were killed because he might be succeeded by a weaker man."

De Valera would by August 1922 have been well aware of his loss of influence with the men fighting the war, with whom the initiative now lay. He left the farmhouse and continued on his way to Dublin.

Oblivious to the events behind them, the convoy pressed on. They stopped at Bandon, and Collins met local senior Army officers at the Devonshire Hotel.

On and on the convey went, deeper into West Cork, sometimes on side roads, sometimes stopping to remove trees toppled on to the main road. Collins joined his men in getting stuck in with axes and cross-saws to cut a way through.

There were more meetings with senior officers in Skibbereen and Rosscarbery, more reunions with friends and family at Clonakilty, Caherbeg, and Coolcraheen.

At the Four Alls pub at Sam's Cross, he bought his men a round of the local 'Wrassler' porter.

Outside Clonakilty, they diverted to Woodfield, the ruins of Michael Collins' family home, torched by the British Army what now seemed like an eternity before, in the War of Independence.

The ambush is laid

Back at Béal na Bláth, the ambush was in place around noon.

The first ambush party consisted of about 25 men. During the day these men came and went.

It was a few hundred yards south of the crossroads, in a shallow, soggy valley through which a stream flows. At a bend in the road, before where Carroll's Bridge crosses the stream, they placed their barricade. Vehicles from Bandon would have slowed down through the double bend in the road, so the barricade didn't need to be much, and it wasn't: a brewer's wagon with a wheel removed and crates of empty bottles taken from the back of the wagon.

A landmine with gelignite was buried in the road just in front of the barricade. Another roadblock lay across the only boreen leading from the road at that point.

The main barricade cut off access to a laneway that ran from Carroll's Bridge parallel to, and slightly above, the main road. From that laneway smaller lanes ran at right angles to local farms. Taken together, the laneway and farm lanes made up a perfect combination of shooting gallery down onto the road, and lines of retreat.

At about the same time, a few miles away in Lee's Hotel in Bandon, his brother Seán Hales, the Officer Commanding the National Army in West Cork, met Michael Collins for the general's last engagement of the day. 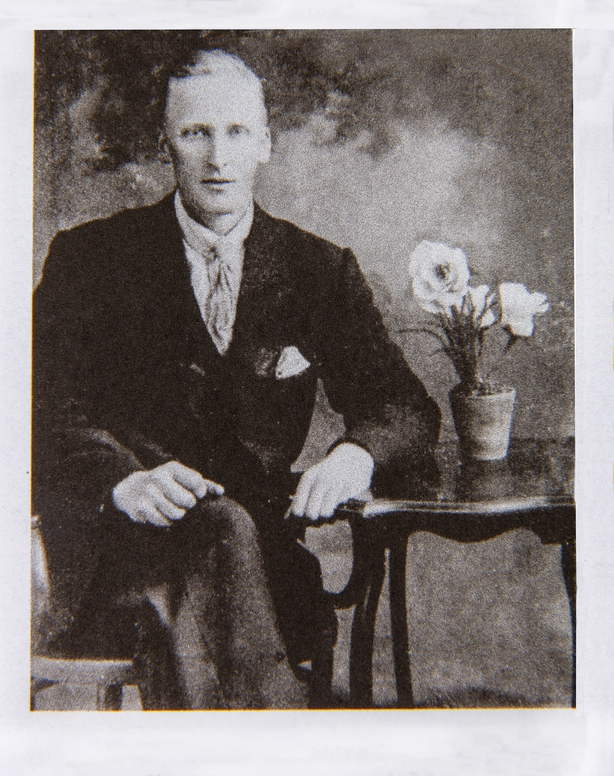 'If we run into an ambush along the way, we'll stand and fight them'

It has never been explained why, to return to Cork City, the convoy went the direction it did. Not only did the road take them away from the city, it was folly to return by a route along which the vehicles had passed that morning.

Liam Deasy believed there were four other roads open to the convoy that evening, to take them back to the city.

At one point just before leaving Bandon, Collins seemed to sense the looming danger. An officer looked at the few vehicles drawn up for departure, and asked why such a little convoy was setting off to carry the Commander in Chief through countryside swarming with Irregulars.

Collins laughed off the concerns. "Where you can go we can go." But then he quietly took Emmet Dalton aside, and said: "If we run into an ambush along the way, we'll stand and fight them." 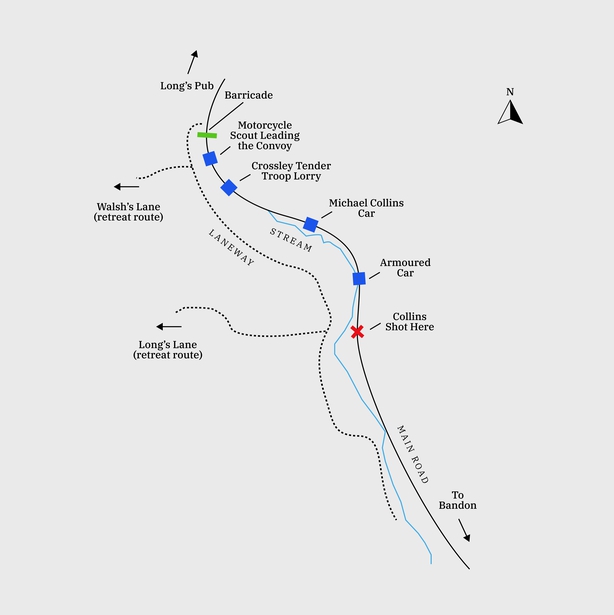 The convoy departed around 7pm local time. The motorcycle outrider first, followed by the Crossley Tender, then the Touring Car, finally the armoured car.

As the convoy approached the narrow valley, perhaps Collins sensed that if there was to be an ambush, it would be here. Soldiers in the Crossley Tender saw Collins reach down and lift a rifle from the floor of the Touring Car and lay it across his knees.

Liam Deasy had returned to the ambush site as evening approached, to find Tom Hales ordering the ambush party to stand down. The two men agreed that it was unlikely the convoy would be returning that way after all. Hales ordered the position cleared up – the barricade dismantled and removed, and the landmine disarmed.

Members of the ambush party began to move away from the site, some heading south, some north. Several men took up positions on the laneway above the road, to cover those clearing the barricade and mine.

On hearing the approaching convoy some of the men clearing the road ran to the laneway, carrying the gelignite coil and plunger for the landmine, leaving the casing behind.

'Stop! Jump out and we'll fight them!'

The first shots were fired by the men stationed on the laneway.

The outrider dismounted and headed for cover. The Crossley Tender stopped, the soldiers opened fire on the ambushers with rifles and machine guns. Two of the IRA men were wounded. The Leyland was hit, the windscreen shattered. The firing here only lasted a few minutes.

Dalton had ordered the driver of the Leyland to 'Drive like hell!', but Collins countermanded the order, telling the driver to stop. "Stop! Jump out and we'll fight them!"

They jumped out of the Leyland, and took cover on the left hand side of the road.

Collins and Dalton took up firing positions in front of the Leyland, shooting at the ambushers moving down the laneway.

The armoured car had moved up near the Leyland.

The IRA men were firing down on the road from the laneway. The armoured car's machine gun was brought into action, firing at the men in the lane from 40 yards.

After firing two and a half belts of ammunition, the armoured car's machine gun jammed. The convoy's main advantage in the fight had just disappeared.

'Come on boys, there they are running up the road!'

After about 20 minutes there was a lull in the firing. Dalton recalled Collins was now firing from behind the armoured car. He said the Commander in Chief then shouted "come on boys, there they are running up the road!"

The ambushers had run down the laneway, heading for one of their lines of retreat, the lane to Long's Farm. Here they were exposed to fire from the road.

Collins had moved from beside the Leyland back to the rear of the armoured car. He then moved 15 yards out onto the road to get a better firing position from where to shoot at the retreating IRA men.

'If he had ever been in a scrap, he'd have learned to stay down'

He was then seen to stand up, reloading.

Dalton reflected bitterly afterwards. "If he had ever been in a scrap, he'd have learned to stay down."

The General had moved out of Dalton's line of sight. Then Dalton said he thought he heard a faint cry 'Emmet'.

He and Commandant Sean O'Connell moved to where Collins had been firing from, and found him lying motionless.

Read the full article here: 'It would be a great pity if Collins were killed'