Ukrainian President Volodymyr Zelensky has thanked Ireland for its support amid the Russian invasion as he held talks with the Taoiseach in Kyiv.

Micheál Martin restated Irish solidarity with the people of Ukraine as he met Mr Zelensky in the war-torn capital.

After holding a bilateral meeting with the Taoiseach, Mr Zelensky posted a social media message expressing his gratitude.

"Thank you that in this defining time for our state Ireland is near," he said. "I am grateful that Ireland stands by our side in this crucial time for our country."

Ireland has taken in more than 36,000 Ukrainian refugees since Russia invaded neighbouring Ukraine at the end of February.

Earlier, Mr Martin witnessed the devastation inflicted by invading Russian forces as he visited areas of Kyiv that have borne the brunt of the offensive on the city.

Mr Martin began a trip to the Ukrainian capital by viewing the conflict-scarred suburbs of Borodyanka, Bucha and Irpin.

The tour included a sombre visit to the site of a mass grave in the grounds of a church in Bucha. 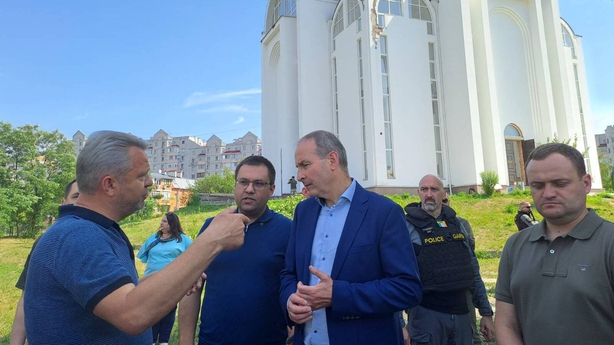 Mr Martin is using the visit to Kyiv to reiterate solidarity with the Ukrainian authorities in the face of the Russian invasion.

His day-long itinerary in the war-torn city began with a trip to Borodyanka - a town on the outskirts of Kyiv that has suffered widespread damage under Russian shelling.

On the 30-minute drive from the railway station, the Taoiseach passed Hostomel airport, where his convoy stopped to observe a demolished bridge.

The scale of Ukrainian efforts to defend their capital was evident, with numerous bunkers and fortifications visible on the journey.

In Borodyanka, Mr Martin met the town's mayor and viewed apartment blocks gutted by fire during the Russian bombardment.

From there, Mr Martin visited the site of a mass grave in Bucha. The grave was discovered in the grounds of the church of St Andrew.

A local cleric showed Mr Martin the site and an associated exhibition of graphic photographs of exhumed bodies and pictures of civilians left dead on the streets of the suburb when Russian forces retreated.

The Irish delegation then travelled to nearby Irpin where the Taoiseach was shown badly damaged apartment blocks that had been hit by Russian shells. 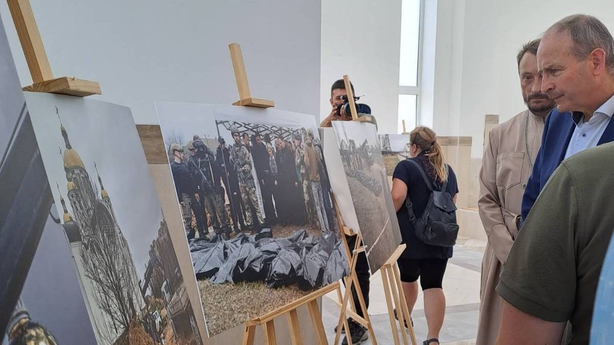 Afterwards, Mr Martin said: "It is difficult to comprehend the devastation and inhumanity of Russia's attacks on Irpin, Borodyanka and Bucha.

"Clear how important it is for women and children to get to Ireland to escape trauma and brutality. We stand with Ukraine."

In meetings later, Mr Martin will discuss how Ireland and the EU can support Ukraine. 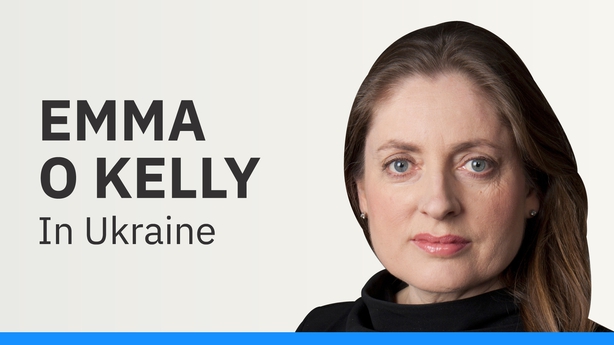 The Taoiseach arrived in Kyiv just after 9am Ukraine time today.

The first stop was a town called Borodyanka on the outskirts of the city of Kyiv.

There, we saw what was left after the intense bombardment of the town and also the impact of the subsequent occupation.

The town governor told Micheál Martin about what the town had gone through as they looked at apartment buildings that are just shells of what they were, or are now completely destroyed.

Travelling over broken bridges and a roadway lined on all sides with more devastation, it was onto Bucha. The Taoiseach was brought to the site of what had been a mass grave.

Those that were buried there have now been exhumed. This process began as the Russians were forced to retreat.

A church there houses an exhibition of what was discovered in the mass grave - extremely disturbing images of what the people of the town found when they came to reclaim the bodies of those they lost.

All the sites of these atrocities are in towns popular in recent years with young Ukrainian families and families who have been priced out of the property markets in Kyiv city. 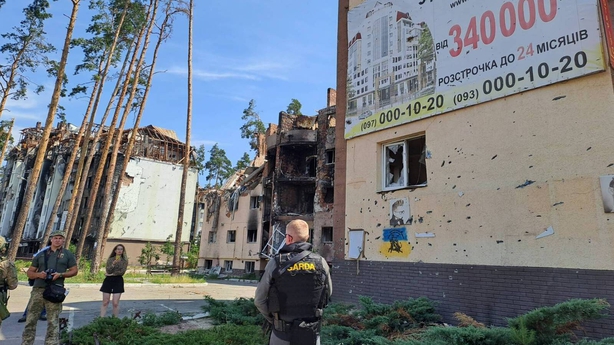 On the side of one bombed out apartment building we saw signs advertising new homes for families hanging from a building that has been destroyed.

A series of museums dedicated to previous wars were also on the itinerary today, one of which has now made room for installations about this war. This war is already being formally honoured in the collective memory of society.

There, the Taoiseach placed a teddy bear at a memorial to the children confirmed killed in this conflict so far. That number now stands at 343 and counting.

Mr Martin will restate Ireland's full backing for continuing sanctions against Russian President Vladimir Putin's regime, for Ukraine's path to full EU membership, as well as Ireland's commitment to work with the EU on the reconstruction of Ukraine.

"The people of Ireland stand with Ukraine and its people in the face of Russia's immoral and unprovoked war of terror," he said.

"The bombardment and attacks on civilians are nothing short of war crimes, and I will use my visit to express Ireland's support for moves to hold those behind these attacks fully accountable.

"The spirit and resolve of the Ukrainian people has inspired us all, and Ireland will provide every support for Ukraine's path to full EU membership, and continue to welcome and support civilians fleeing this war."

It is the first visit by a Taoiseach to the eastern European country.

It also comes after Mr Putin on Monday declared victory in seizing the eastern Ukrainian province of Luhansk, with his troops escalating their offensive in neighbouring Donetsk.

Mr Martin has warned previously that the Russian president appeared to be leveraging its natural gas supplies to exert maximum pressure on Europe ahead of the winter period.

The Taoiseach has also been a vocal advocate for Ukraine's fast-tracked membership of the EU.

Mr Zelensky has previously thanked Ireland for its "active support of Ukraine's European aspirations".
Ireland has also taken in more than 36,000 Ukrainian refugees since Russia invaded neighbouring Ukraine at the end of February.

Ireland has given €20m in humanitarian support and assistance to the country, as well as health equipment and medical donations worth more than €4.5m.