The Government has defended the standard of accommodation being provided to asylum seekers, after it emerged that large numbers of people are sleeping on the floor at a Dublin hotel.

The responsibility for allocating accommodation for asylum seekers rests with the Department of Children, Integration, Disability, Equality and Youth and not with the hotel.

The department confirmed that it is aware that people are sleeping on the floor of the hotel.

RTÉ's This Week spoke to several people staying at the hotel who said there were people sleeping on the floors in the complex.

When asked if families, or children, were sleeping on the floor, he said "everybody is sleeping there" adding that they were "not good conditions."

He said some people are staying for a few days, others for a few weeks.

When asked if it was safe, he said it was, and that there was security in the hotel.

The Irish Refugee Council, which visited the site, has raised concerns about fire safety and other safety risks to the applicants. It described the situation as "deeply concerning and unacceptable".

The department said it is under "severe pressure" to source accommodation after an increase in the number of people arriving in Ireland seeking international protection.

It said: "Since the beginning of February the Department has accommodated an additional 27,100 people, of whom 4,100 are international protection applicants."

It said it was therefore necessary to create a "temporary resting area" in the Red Cow facility.

The department said "the accommodation shown (in the photographs) falls far short of what the Department would wish to offer those who flee here, however in very difficult circumstances at present, it was necessary."

It said that "typically international applicants remain there for two to four days while accommodation is being sourced for them in pre-reception facilities or in IPAS (International Protection Accommodation Services) centres."

The Irish Refugee Council, and the Jesuit Refugee Service, which visited the Red Cow Hotel to observe the conditions, wrote to Minister for Justice Helen McEntee and Minister for Children, Integration, Disability, Equality and Youth Roderic O'Gorman to express their concern at the conditions.

In the letter it said it wanted to highlight "the use of two of the hotel's ballrooms to accommodate people. No beds are provided and people are sleeping on the carpet or on makeshift beds from chairs. There are 20-25 people in each section of the ballroom (possibly more)."

"This is part of a wider group of up to 300 applicants who are in ad hoc sleeping arrangements (beds placed in converted conference and meeting rooms) in the hotel overflow area, in addition to 500 applicants accommodated in hotel rooms. 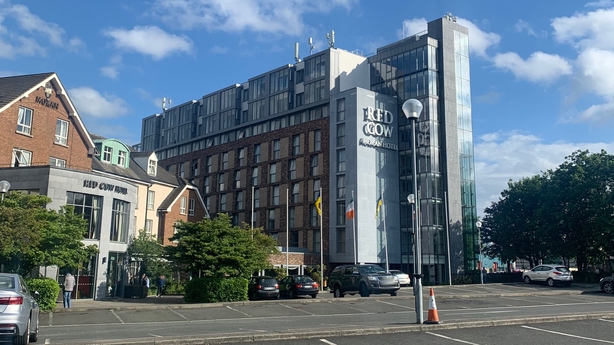 "The ballroom configuration presents obvious fire hazard and health safety risks to applicants and is contrary to the reception conditions directive.

"We request that the practice of accommodating international protection applicants on the floors of communal hotel recreational areas cease immediately and concrete measures be taken to ensure it does not occur again, at the Red Cow Hotel, or elsewhere."

The Department of Children, Equality, Disability, Integration and Youth said it was contracting additional accommodation weekly for international protection applicants.

However, it said it is "continuing to experience acute "an accommodation shortage" which it said would "continue over the summer during the high tourist season."

Mr Henderson said he observed beds in close proximity to one another in conference rooms and meeting rooms at the hotel, while in two ballrooms around 30 people were sleeping alongside each other, with some using chairs and duvets as makeshift beds.

Speaking on This Week he said they have "very serious concerns" about this.

"It is plainly contradictory to basic health and safety. It also raises issues around fire safety and I think there is also the question around the use of public money to accommodate people in such a manner."

Mr Henderson described a response from Minister O'Gorman's department that there is no option of other accommodation as "disappointing".

He said he finds it hard to believe that 300 beds, where people can live with basic dignity, cannot be sourced.

He said they recognise this is an exceptional situation but the practice "must end".