There will be absolutely no ambiguity regarding the clinical and operational independence of the new National Maternity Hospital in Dublin, the Minister for Health has said.

Stephen Donnelly was speaking at the Department of Health after the Cabinet delayed deciding on a proposal to move the hospital to the St Vincent's campus.

The issue will come before ministers again in two weeks' time.

The Cabinet is still supportive of the move and ministers want to see the new maternity hospital built at the south Dublin site.

Minister Donnelly will attend the Oireachtas Committee on Health to answer questions on the plan.

The Cabinet noted the proposal and the legal agreements between the parties to allow the development of the hospital.

Mr Donnelly said there are "multiple layers of legal and governance protection" in place and he said the hospital "will provide all services".

He said the two-week delay to the process, before it is considered by the Cabinet, is due to people raising very genuine concerns about the development.

Mr Donnelly said given the concerns, a decision was taken by the Government to publish the documents relating to the project first, which he described as "a respectful approach".

"They're making a very reasonable ask, which is before Cabinet signs-off on this, given the importance of this project and given the concerns that people have and given the history in this State between women's healthcare and the church, given all of that, all the context we know, let's publish the documents first."

The minister said the biggest concern is that people want absolute reassurance that the new hospital will be fully independent, clinically and operationally, and that it will offer all services and he said "that is absolutely the case".

"People will be able to see within the Memorandum of Understanding the clinical protections in the NMH and indeed the obligations on the new National Maternity Hospital to provide all services."

He added: "There is a golden share held by the Minister for Health, which allows the minister to intervene if for some reason all clinical services are not being provided."

Mr Donnelly said the Oireachtas and members of the public will be best served by seeing the detail of the plan for the development before a final decision is made by the Government.

The documents have been published tonight on the HSE website.

It is understood Minister Catherine Martin raised concerns about the hospital plan.

She felt it was being rushed and the language used about the project was not appropriate.

It is understood the Green Party TD felt the protection of services needed to be clear. She also raised the issue of the State's investment in the project.

It is understood Minister for Justice Helen McEntee raised issues about the communication regarding the National Maternity Hospital plan.

The minister, who is supportive of the plan, also wished to see more advanced notice for Cabinet colleagues.

Clinicians in support of NMH

The Master of the National Maternity Hospital said the new NMH will continue to provide all the services offered in the current hospital in Holles Street.

Professor Shane Higgins said such a position is enshrined in the legal framework.

He also said "it is so important for the women and infants of the country that we provide this world class facility."

Professor Higgins said an excellent service is provided at the existing National Maternity Hospital, but he said "we're constantly under pressure for space".

Director of Midwifery and Nursing at the National Maternity Hospital Mary Brosnan said: "I think we provide an amazing service as it is but our facilities do let us down".

She said the current NHM is still using multi-occupancy wards, with very little privacy and sharing bathrooms, adding that the plan for the new facility "reflects the best international practice".

A former master of the NMH said "we must not let this project fall apart because of misinformation".

Dr Rhona Mahony said: "It is an opportunity that must not be missed.

"I really hope that we are two weeks away from a Government commitment to build this hospital ... there is a lot at stake here."

Dr Mahony, who is a Consultant Obstetrician and Gynaecologist, said: "We are talking about building a 21st century hospital for women that will deliver the very best of women's health care, not just in this country, but a healthcare setting that will be admired, I think all across Europe, if not the world."

She said that would be in stark contrast to the conditions being operated under at the moment.

In response to concerns over the development of the facility at the St Vincent’s campus, Dr Mahony said "every procedure that is permissible under Irish law will be performed at the new maternity hospital" including, termination of pregnancy, the provision of contraception and assisted reproduction.

The Clinical Director of the HSE’s National Women and Infants Health Programme, Dr Clíona Murphy, said she is "glad to see we are moving closer to a world-class women and infants hospital, co-located with all the specialised services required".

Earlier, the Taoiseach said the delay in developing the new hospital has been far too long.

Speaking ahead of the Cabinet meeting, Micheál Martin said he was "genuinely satisfied" that safeguards are in place to allow the project to proceed.

He said the existing hospital facility at Holles Street is not fit for purpose and does not serve women well, in terms of the physical conditions.

He also said "many women involved in gynaecology and obstetrics and many expert clinicians are very anxious that this facility would go ahead."

Mr Martin was responding to calls from opposition parties not to sign-off on the project at the St Vincent's Hospital site before it undergoes Oireachtas scrutiny.

However, he said "there are strong protections" in place for the new maternity hospital and he said there needs to be "perspective and balance in all of this, I mean the Government will always uphold the law of the land as it is in the Constitution or in our laws." 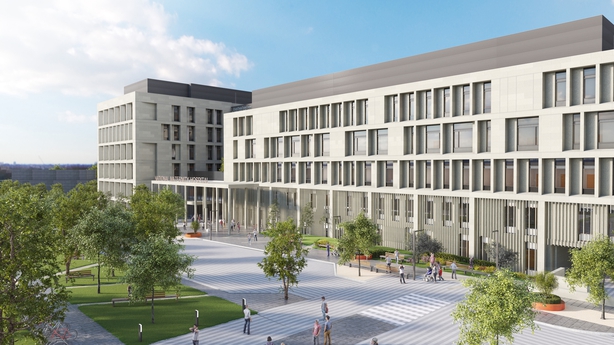 Earlier, Opposition parties called on the Cabinet not to sign off on proposals to develop the hospital at the site.

Sinn Féin's health spokesperson David Cullinane said the Cabinet "should not sign off on the new National Maternity Hospital without Oireachtas scrutiny of the legal framework".

In a tweet, he added: "This is too important. We cannot be expected to take a leap of faith without proper scrutiny. The ownership of the land and hospital are crucial issues."

Social Democrats co-leader Róisín Shortall said she was shocked that the Cabinet is contemplating signing off on proposals to develop the NMH at the St Vincent's Hospital campus before the Oireachtas gets to examine the governance arrangements.

People Before Profit TD Bríd Smith said that any hint of religious influence over the provision of abortion and sterilisation services in the new National Maternity Hospital would see a political backlash.

Meanwhile, Independent Senator Alice Mary Higgins said: "Approving this bad decision will not allow us to 'move on'.

"It will tie the State to decades more of power wrangling over women's health in boardrooms and create unnecessary risk."

The SVH CLG said the hospital "will have its own separate service arrangement with the HSE".

In a statement, it said: "Any suggestion that there is something 'murky’ about the manner in which the SVH CLG was incorporated is disingenuous and continues the campaign of scaremongering and misinformation being spread about our group."

It said it is "an Irish incorporated not-for-profit company with charitable status whose purpose and constitutions have been approved by the Charities Regulator and the Companies Registration Office and which is bound by Irish company law".

It add that St Vincent’s Holdings CLG was set up through a service provided by PWC, which it described as "standard business practice."

"The Board of St Vincent’s Healthcare Group has always been clear in our determination to evolve as a secular organisation delivering world-class healthcare services in Ireland to provide the best outcomes for our patients and their families. This is precisely what has been achieved with last week’s transfer of the RSC shareholding to St Vincent’s Holding CLG (SVH CLG) and the changes, particularly in the ethical requirements, made in the SVHG Constitution."