Camogie player Kate Moran has been remembered as a "precious daughter and trustworthy friend" at her funeral mass.

Ms Moran, aged 20, died after she was injured during a senior league game in Galway on Monday.

Her funeral was held at the Church of The Sacred Heart, Ryehill, Monivea, Co Galway.

Hundreds lined the route as the funeral cortege travelled the short distance from her home to the church.

Ms Moran's father Cathal spoke lovingly of his daughter, their eldest child, in an emotional eulogy.

"Our beautiful Kate, whom we love so dearly, Mary and I are so proud to be your parents Kate and we love you so much since the day you were born," he said.

"There is no other choice but we have to let you go somewhere else Kate, we hope that you're OK."

In his homily, Fr Ronnie Boyle said the whole community has been stunned into silence for the last number of days by this "inconceivable, horrible event".

Fr Boyle said: "There are occasions in life when no words seem appropriate.

"When we enter total sadness and desolation when we are numbed - speechless.

"This week - that's exactly what everyone in Monivea, Athenry - and indeed right across the country have felt.

"So, I thought about that idea of silence, and then I said to myself 'No. The correct way to celebrate Katie’s life is with words and actions because that's who Katie was.'

"I also know no words will take away the grief, dry the tears, or answer the questions we bring today."

Ms Moran, who played for Athenry Camogie Club, was injured in an incident during a club match between Ardrahan and Athenry.

Emergency services treated her at the scene before she was taken to University Hospital Galway.

However, she died from her injuries on Tuesday morning.

On Wednesday evening, thousands of people turned out for a candelight vigil in memory of Ms Moran, who was on her way to becoming an inter-county star. 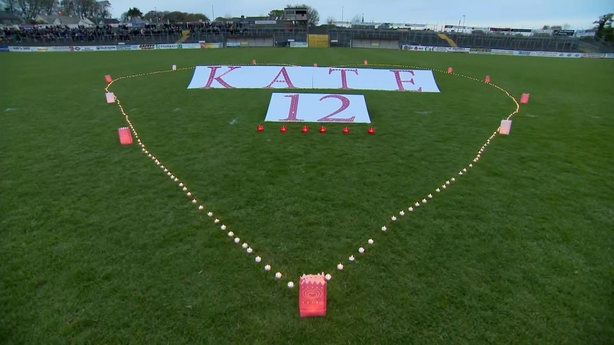 "We are here not only to mourn but also to celebrate Katie's life, to acknowledge that this was a young woman who in an astonishingly short amount of time touched a lot of souls," Fr Boyle added.

"I hear all of you who knew her repeat the same things over and over again.

"Kate was such a beautiful young girl blessed with talent as a camogie player, her future was bright, the young star who represented Galway at U16 level and won two All-Ireland medals and also represented Athenry at senior level.

"The intelligent, ambitious student, the generous, caring daughter and friend and team mate and role model to her peers."

"I so wish that today I could stand here and make sense of Katie's death, but I am at a loss," Fr Boyle added.

"Within the scope of human reason, a tragedy such as this simply doesn't make sense. Therefore, we either despair or find our strength in faith.

"We remember the joy that she brought us - the love that she showed - the kindness that she shared and we thank you for it.

"We recall her before you eternal father as a precious daughter, sister, granddaughter - a quiet and trustworthy friend."

After mass Ms Moran was laid to rest next to her grandfather Georgie Moran at Templemoyle graveyard in nearby Newcastle.

Representatives of the President and Taoiseach were both in attendance at the requiem mass.