A survey by Irish Business Against Litter (IBAL) has deemed Naas the cleanest out of 40 towns and cities across Ireland.

The litter survey conducted by An Taisce found that litter from PPE remains at its highest level since the pandemic began and overall, litter levels in towns and cities have risen.

But Naas was found to be "spotless" with surveyors describing Naas as "virtually litter free", with compliments to waterside environment at Harbour View, the Fairgreen recycle facility and Shopping Arcade off North Main Street.

A total of 22 out of 40 towns were deemed clean while Waterford was the only clean city.

Ireland's towns that were found to be cleaner than European norms were:

Dublin north inner city was placed as number 40 in the rankings and described as a "litter blackspot", while areas listed as heavily littered were Cork northside, Dublin city centre and Drogheda.

The canal was littered with "fencing, old bicycles and discarded domestic items", while bags of rubbish "dominated" at Crinan Strand and Aldborough Place.

Galvone in Limerick city improved significantly rising six places in the rankings, but the urban areas of Ballymun, Tallaght and Cork northside all fell back on 2021's results with Galway city also losing its clean status. 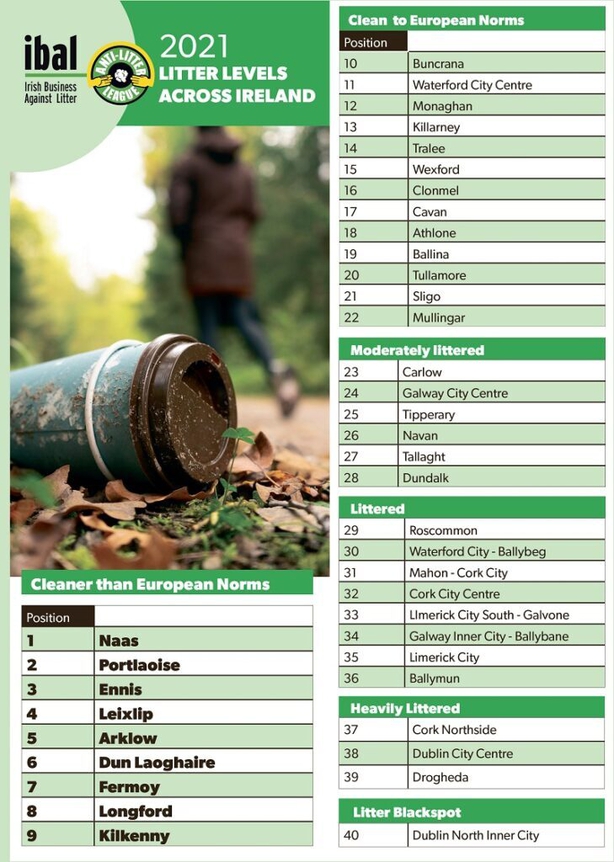 Conor Horgan of IBAL said that there were very few positives to draw from the survey.

"Other than Limerick's Galvone and Ballybeg in Waterford, the An Taisce reports make for grim reading. Covid is certainly a factor but it alone cannot explain a negative underlying trend of recent years in the cleanliness of our urban areas.

"The disposable blue face mask has become a ubiquitous part of the landscape up and down the country. People have not moved to reusable masks and people are not taking care of their masks."

Mr Horgan called on local authorities to address sites identified as litter, as the survey found that only 33% had addressed issues by the time the survey was conducted late last year.

There was also a noted rise in litter like coffee cups as well as alcohol-related litter.

"In our last study we flagged litter in our cities as having reached levels not seen in ten years. Unfortunately, recent months have only brought further deterioration. Our towns are much cleaner than they were say 15 years ago, but it seems our cities have reverted to the bad old days of the noughties, with litter the norm rather than the exception," he said.