The Conservative government in the UK "doesn't give a damn" about Ireland, which is once again "facing collateral damage" from Brexit, according to Sinn Féin TD Pearse Doherty.

He was responding to proposed new British immigration laws that would see non-Irish EU citizens living in the Republic have to apply online for pre-travel clearance from the UK in order to cross the border on the island of Ireland.

Under the Nationality and Borders Bill, they would be required to apply for an Electronic Travel Authorisation (ETA) before entering the UK, including when crossing into Northern Ireland.

'Ireland once again faces the prospect of collateral damage caused by a Tory Government in Westminster that does not give a damn about it' says Sinn Féin's @PearseDoherty on how proposed new British immigration laws could affect the border | https://t.co/z9el2arLih pic.twitter.com/Nr4kUR4OdI

In response to Mr Doherty's comments, Tánaiste Leo Varadkar said the Government will communicate its "concerns and our objections" to the UK over the proposal.

Speaking in the Dáil, he said it "doesn't come as a huge surprise" and warned that the UK is "going to harden its borders".

"Ending free movement was a big part of the argument that was made" for Brexit, he added.

The Taoiseach said the Government would engage with the UK government on the proposed laws.

Micheál Martin said the proposal is of concern because the Government wants to maintain the seamless movement of people on the Island.

He said that, given the realities of the island, a lot of people will travel north and south and this bill is "something we could do without." 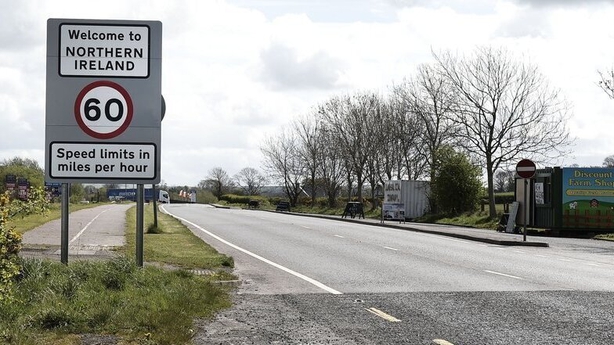 A Department of Foreign Affairs spokesperson said: "The Common Travel Area (CTA) is a long-standing arrangement that allows Irish and British citizens to move freely between Ireland and the UK.

"With regard to travel and immigration matters, the CTA covers Irish and British citizens."

The measure will also apply to citizens of the European Economic Area (EEA) living in Ireland, which includes people from Norway, Liechtenstein and Iceland.

How such a system would be enforceable when it comes to people crossing the border from the Republic to Northern Ireland is not clear from the Nationality and Borders Bill.

The proposals have been described as "unworkable" by an Alliance Party MP for North Down.

Speaking on RTÉ's Morning Ireland, Stephen Farry said the proposals would add another layer of bureaucracy and complexity and will create a sense of "legal risk and jeopardy" for people who are unaware of the requirements and cross into Northern Ireland in good faith.

Mr Farry said it was "very important that we stress this is not about border controls on the land border" and he said the UK government "are clear on that point".

However, he said it does create a grey area, as enforcement on this forthcoming legal requirement is not clear.

He said that many will have no knowledge or understanding of the need for this document when they cross into Northern Ireland.

SDLP MP Claire Hanna has said the proposals are "genuinely very problematic and fundamentally unsuitable for the way of life" on the island of Ireland.

The MP for South Belfast said that the measures have not been thought through in how they will affect the Ireland of island.

Speaking on RTÉ's Today with Claire Byrne, Ms Hanna said while it does not require border checks it will add a lot of bureaucracy or legal uncertainty for those wanting to cross the border.

She said it has implications for tourism and business, as well as everyday cross-border travel.

Ms Hanna said it was "slipped in by the British government" and that the proposed bill contains many other concerning measures in relation to asylum.