An 11-year-old Dublin girl has described her shock and excitement when football star Cristiano Ronaldo gave her his jersey following Ireland's match again Portugal at the Aviva Stadium last night.

Speaking on RTÉ's Morning Ireland, Addison Whelan described how she jumped over the pitchside barrier after the World Cup Qualifier and sprinted onto the pitch to try to meet her hero.

"There were security guards running behind me and coming from the other corner ... I ran towards the halfway line but then they caught me. I was screaming Ronaldo's name," she said. 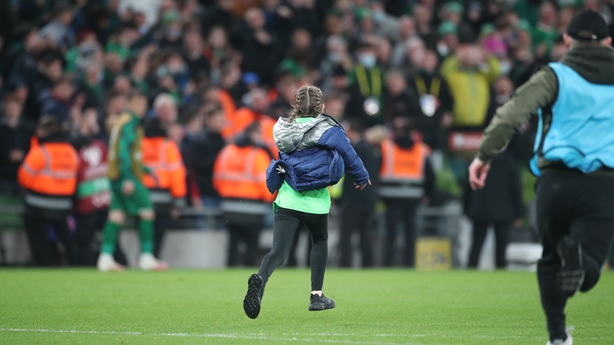 The Shelbourne underage player explained how Ronaldo turned around and when he saw her he told the security guards to leave her alone and went over to Addison.

"I was in shock and crying," she said.

She asked Ronaldo if she could have his jersey as she told him she was a huge fan.

When her dad saw him taking his shirt off to give to his daughter, he was in shock, she said.

She has described the moment as her "dream coming true".

Speaking this morning, she said Ronaldo's shirt is still right by her side and she has not tried it on.

The young footballer said she is focused on having a football career herself and hopes one day to play for Ireland or Arsenal.

The FAI confirmed this evening that Addison would not face a fine for running onto the pitch, as is usually the case for pitch invaders.

An FAI spokesperson said: "We want to reassure Addison that of course she will not face any fine for running onto the pitch and asking for Ronaldo's jersey.

"On a serious note we would remind fans at all games that fines are liable to be levied by UEFA in certain instances for entering the field of play, particularly when the game is ongoing and we urge all fans to respect this very sensible rule."