Variable speed limits are set to be introduced on the M50 under a new €50 million programme to implement intelligent transport systems technology for motorways.

Digital gantries across the 46km-long M50 will display changeable speed limits allowing operators to reduce speed on sections of the motorway or close lanes if there are traffic jams, a road crash or if emergency service access is needed.

An additional €30 million will be needed to run the service.

The Transport Infrastructure Ireland's (TII) enhancing Motorway Operation Services (eMOS) programme is being rolled out on a phased basis.

The first digital signs are expected to be switched on between Junction 4 Ballymun and Junction 6 Castleknock in the coming weeks and the system should be fully deployed by early 2023. 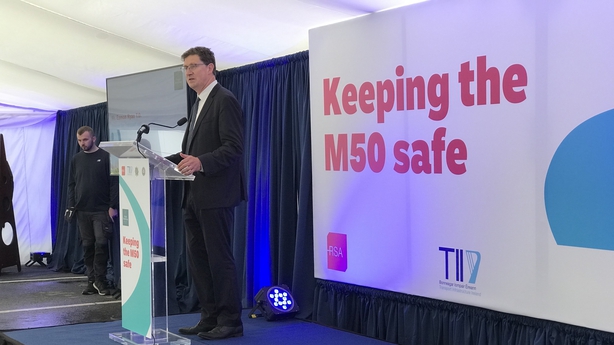 Minister for Transport Eamon Ryan said that by enabling motorway operators to react to events on the motorway as they occur, the programme will enhance safety for road users, emergency responders and road workers.

He said that by introducing the system on a phased basis, drivers are being given the time to familiarise
themselves with the new signs on a shorter section of the M50 before additional phases come online.

TII's Sean O’Neill said the M50 is a "critical corridor" for the entire country, and outlined to RTÉ's News At One why the changes were to be introduced.

"Primarily to manage the M50 during incidents and events where emergency service personnel are dealing with those incidents, secondarily to help with the flow of traffic on the M50 since the volume has increased by 40% between 2011 and 2019.

"The M50 is such a critical corridor for the entire country, you know, Dublin Port has direct access to the M50, which distributes over €35 billion worth of goods and services throughout the entire island of Ireland and the entire country so it's a very important piece of infrastructure for all of us."

He said that there are no plans to increase tolls, and added that he has been told repeatedly that multipoint tolling is not going to happen.