Gardaí believe they have seized up to half a tonne of cocaine, which was disguised as charcoal and concealed in a shipment of bags of fuel to Ireland.

The drugs are estimated to be worth over €34 million, almost four times the value of all the cocaine seized here for all of last year.

It is the first time this method of drugs smuggling has been discovered in Ireland.

The drugs were seized as part of an investigation led by the Garda Drugs and Organised Crime Bureau, working with the Dutch police, Revenue and Customs and the Defence Forces.

The drugs, which were hidden in over 2,000 20kg bags of charcoal, were smuggled in two large containers from South America to Rotterdam.

The containers were detained by the Dutch authorities and handed over to gardaí investigating the drugs smuggling operation.

The Irish Naval Service then escorted the seizure from the Netherlands into Dublin Port last weekend.

Customs officers x-rayed the bags of charcoal to identify and separate the bags containing the 'charcoal cocaine'.

Around 100 bags of charcoal were taken to FSI where they are being tested for cocaine. However, gardaí estimate the seizure is worth more than €34m.

The process of disguising the drugs involved mixing pure cocaine with a carbon dust, a black dye and an odour blocker.

This was then moulded into blocks to look like charcoal and hidden in the bags. 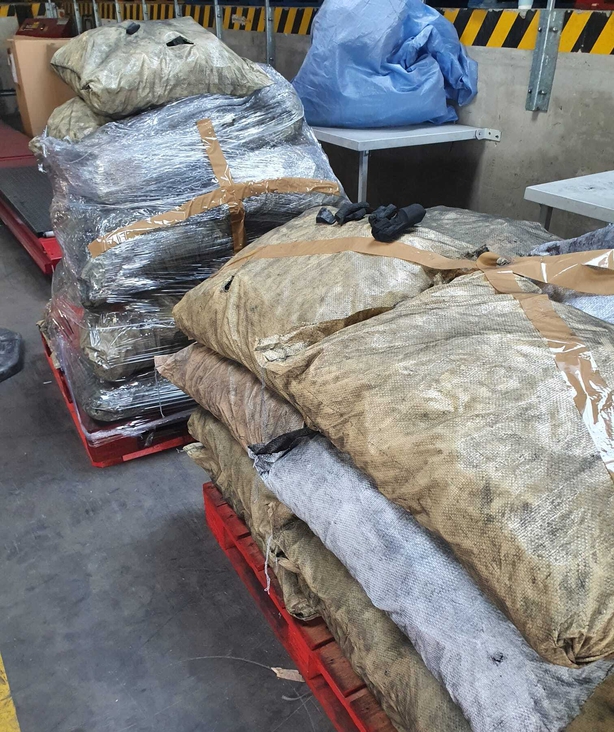 Drug traffickers use this method because the shape and colour of the drugs is similar and makes it extremely difficult to identify the cocaine.

The process also eliminates the smell of cocaine, which renders the drug undetectable to sniffer dogs.

It is the first time drugs seized in another country have been sent to Ireland and the first time an attempt to smuggle cocaine disguised as charcoal has been discovered here.

The drugs were destined for the Irish market and the extraction of the cocaine entails a complicated chemical process.

Gardaí believe the gang planned to bring in a specialist chemist, most likely from South America where the consignment was prepared, to extract the drugs.

The Garda Síochána, through the GNDOCB is leading in an investigation involving a significant international dimension, relating to suspected importation of cocaine into Europe and Ireland, in particular, from South America.

Assistant Commissioner John O'Driscoll, who is assigned to Organised and Serious Crime, said: "This is a significant development in the Garda Síochána’s effort to disrupt and dismantle organised crime groups suspected to be involved in the importation of cocaine and other drugs into Ireland.

"This operation, in which the Garda Drugs & Organised Crime Bureau is taking a lead role, has a significant international dimension and again emphasises the importance of cooperation within the law enforcement community within Europe and further afield."

The head of the Maritime Analysis and Operations Centre based in Lisbon, Michael O'Sullivan said Irish organised crime groups have a leading role in the importation of cocaine into Europe.

Speaking on RTÉ's Six One news, he said full credit should go to the Irish authorities and the Naval Service for making today's seizure.

Mr O'Sullivan, a former Assistant Garda Commissioner, said the cocaine market in Europe is estimated to be worth €14 billion and is growing annually.

Minister for Justice Heather Humphreys said: "I would like to thank the Garda National Drugs and Organised Crime Bureau, the Revenue Customs Service, the Irish Naval Service and Forensic Science Ireland for their work in intercepting and identifying this very large volume of drugs destined for the Irish market.

"This is another very significant seizure in what has been an exceptional year for GNDOCB in disrupting drug trafficking and the supply of illicit drugs by organised crime groups."

Last month, Spanish police made a similar seizure when they found 30 bags of "cocaine charcoal" among over 1,300 bags of real charcoal.

They discovered that a trading company was using a variety of front businesses to carry out suspicious imports linked to a well-known Basque drug trafficker who had previously been in custody in Bolivia.

"The modus operandi involved using a complex chemical process to camouflage the drugs as charcoal, a process that was carried out by the Mexican and Colombian cartels who supplied the alleged kingpin," the Spanish authorities said in a statement.

Gardaí say they expect to carry out arrests as part of their investigation which is ongoing.