President Michael D Higgins has said Irish people "can understand so well" the events unfolding in the Middle East as they commemorate The Famine.

Mr Higgins was speaking as he laid a wreath during the National Famine Commemoration at Glasnevin Cemetery in Dublin this afternoon.

The ceremony included military honours and a wreath laying ceremony in remembrance of all those who suffered or perished during the Famine.

President Higgins spoke about the Famine as a defining moment in Irish history, that has shaped not only our history but also our relationship with land, migration and politics.

He also linked Ireland's harrowing experience with the Famine to our contemporary fight against hunger, poverty and forced migration. 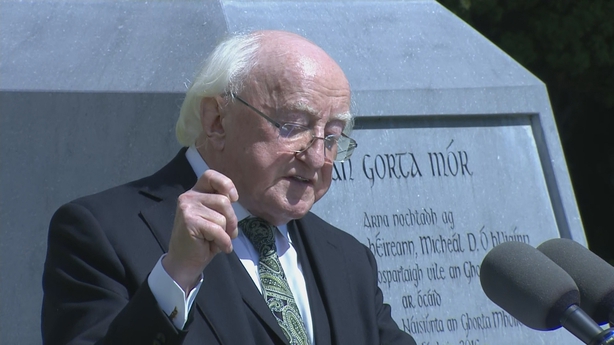 He said Ireland has a moral obligaion to remember and to ask its friends not to surrender in our time to indifference.

President Higgins said said "evictions are provoking conflicts in States that are entitled to their security but who are violating the basic laws that are the tools of internationally-recognised protection".

Globally, 34 million people are at risk of famine, including in Yemen where 250,000 have died from violence, starvation and preventable illness over the past six years, he said.

During Ireland's famine, he said the UK had effectively abdicated its responsibility instead of treating it as a humanitarian crisis it adopted a laissez-faire attitude and allowed the export of grain, stopped the soup kitchens and allowed 500,000 evictions.

President Higgins said it was an "ideological tendency" that sanctioned "poverty amidst plenty, conspicuous consumption amidst mass starvation - an ideology that felt unchallenged in elevating the right of property to that of a natural law".

"The Covid pandemic has surely shown us that there is not only need for a better paradigm of existence, but that it is achievable with a harmonious, sustainable connection of economy, ecology and ethical society"

An estimated 22,000 famine victims are buried at Glasnevin Cemetary.

The annual famine commemoration takes place in a different province each year and had to be moved from Donegal this year because of Covid-19.

The ceremony was also addressed by Minister for Tourism, Culture, Arts, Gaeltacht, Sport and Media, Catherine Martin T.D and His Excellency, Archbishop Jude Thaddeus Okolo, Dean of the Diplomatic Corps.

Lord Mayor of Dublin Hazel Chu and David Bunworth, the chairman of the Dublin Cemeteries Trust were also in attendance.

Speaking before the event, Ms Martin said the "Famine was truly the darkest period of our history".

"Irish people showed tremendous courage and fortitude in coming through that catastrophe to forge the modern nation, with ties to a far flung and successful diaspora throughout the world," she said.

The event is also an opportunity to reflect on the resilience of our people today, Ms Martin added.

Johnson survives 'partygate' but scandal not over yet