More than 140,000 people across the world signed up to participate in today's Darkness Into Light event to raise funds for suicide prevention charity Pieta.

Darkness Into Light is Pieta's main fundraiser and money raised is used for intervention, counselling, and bereavement services.

The event started in 2009 with 400 participants in Dublin's Phoenix Park but since then it has grown nationally and internationally.

Good morning! Who's up... and who stayed in the leaba? We’re in #Kinsale in Co #Cork for this year’s #DIL2021. The rain is pouring down all over the country but, more importantly, the money is flowing in for @PietaHouse — €6M has already been pledged. @rtenews pic.twitter.com/3A4VMvg10J

Covid-19 restrictions meant that organised gatherings had to be cancelled for a second successive year.

People were asked to instead share a sunrise together under social distancing.

Despite heavy rain and wind in many parts of the country, the charity's fundraising goal of €5m was exceeded before the event began. 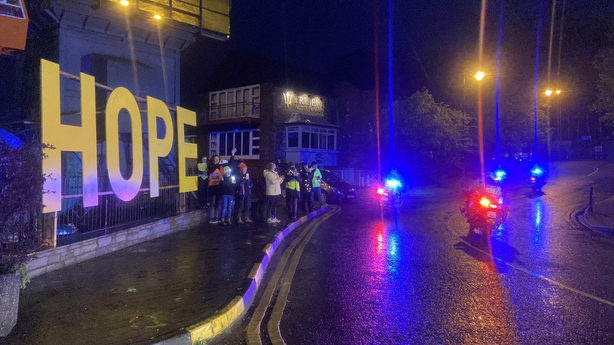 As of 8am, more than €6.4m euro had already been pledged online.

It will be the middle of next week before a final fundraising figure is released.

In Kinsale in Co Cork, more than 200 blue-light and amber-light vehicles took part in a parade around the town at dawn. 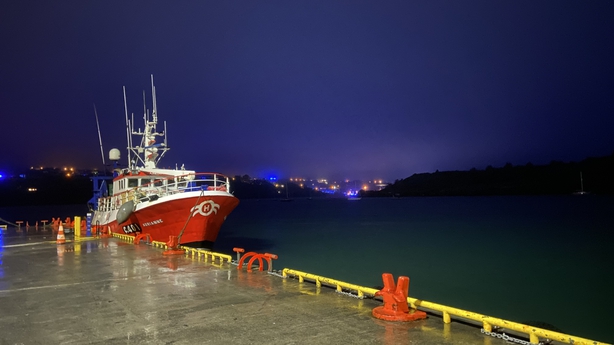 The vehicles were drawn from the HSE, gardaí, the Naval Service, the fire service, Revenue's Customs Service, the Red Cross, St John's Ambulance, the Order of Malta, Cork Airport Police and Fire Service, the Civil Defence and the local farming community.

An absolutely spectacular #DarknessIntoLight2021 from #Kinsale, Co #Cork — a parade of 200+ blue-light and amber-light vehicles to spread a message of hope to those struggling and to thank our frontline emergency services. Drone: ?? Jakub Walutek. #DIL2021 @PietaHouse @rtenews pic.twitter.com/K6TBVm4Qm5

The event was organised by the business community in Kinsale and, as well as Pieta, funds raised will go to support Kinsale Youth Support Services and Kinsale Lions Club.

In Mayo, participants took to Lacken Pier for an early morning swim.

#DarknessIntoLight2021 #PietaHouse
Early swim for Darkness in Light 2021 at Lacken Pier #Mayo well done to all who took part pic.twitter.com/IAUPHN1qk7

The support of those who signed up or donated means that Pieta's free crisis helpline will provide 3,500 people 8 hours of free counselling.

Pieta employs over 200 qualified therapists, and their services are free to anyone who needs them.

More than 22,800 calls and texts were placed to Pieta's free crisis line so far this year.