The number of people in employment during the third quarter of this year stood at 2,295,200, according to the latest Labour Force Survey published by the Central Statistics Office.

That gives an unemployment rate for the third quarter of 7.1%.

All of the decrease in employment was among part-time workers with women bearing the brunt in the accommodation and food sector as well as retail.

Employment rose in the finance and professional and scientific activities.

Unemployment among 15-24 year olds increased from 13.5% to 20% over the year, but the percentage of long-term unemployment remained unchanged.

Meanwhile, the number of actual hours worked per week by the workforce fell by 5.4 % over the year to the end of September, according to the Central Statistics Office.

The CSO's latest "Labour Market Insight Bulletin" reveals that a year ago, the number of hours worked per week stood at 74.5 million.

By last September, they had recovered to 70.5 million, though that was four million lower than a year ago.

But they recovered in the third quarter to 4.9 million as the industry was permitted to remain open.

By contrast, the accommodation and food services sector has seen a weaker recovery.

The number of hours worked weekly collapsed from 5.1 million to just 1.2 million.

However, despite some reopening in the third quarter of this year, the number of hours has only come back to 3.5 million. 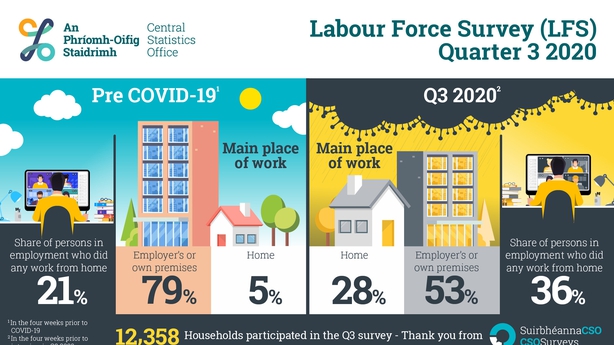 In the four weeks before the pandemic struck in March, just under 80% of workers reported that their main place of work was the employers' or their own premises, with fewer than one in 20 (4.9%) primarily working from home.

However, by the third quarter of the year, the number of people working from an employer's premises had fallen to 53.2%, while those reporting that they were mostly working from home saw a five-fold increase to 27.6%.

In the four weeks before Covid-19, people working from home carried out almost half of their work remotely (46.8%). However by the third quarter, that figure had risen to just over 75%.

Commenting on today's CSO figures, the Minister for Finance said the labour market continues to bear the fall-out from Covid-19 and the associated public health restrictions in the third quarter this year.

But Paschal Donohoe said the rise in total employment and total hours worked in the economy from the second quarter is evidence of the improvement in economic conditions in the third quarter and shows how resilient the country's labour market is.

"The introduction of the Level 5 public health restrictions currently in place has had a significant and rapid impact on our labour market with numbers of claimants for the PUP rising to 350,000 in recent weeks," the Minister said.

"However, I am encouraged by the fact that, with sectors such as construction and manufacturing remaining open, the rise in the number of people relying on the PUP has stayed well below the peak of 600,000 from early May," Mr Donohoe said.

"If we continue our diligent efforts, as we have done to date in reducing the spread of the virus for a second time, many people will return to work once Level 5 restrictions are lifted," he added.