Dublin City Council is investigating the circumstances surrounding the demolition of the former home of a 1916 leader.

O'Rahilly House, at 40 Herbert Park in Ballsbridge, was bulldozed early this morning to make way for luxury apartments.

Michael Joseph O'Rahilly, known as The O'Rahilly, lived there before he was killed during the Easter Rising.

It comes after city councillors voted to list the building as a protected structure last month.

In a statement, Dublin City Council said it was investigating the circumstances surrounding the demolition and once it "has ascertained the facts, it will take any appropriate action".

The council later said it had "written on two occasions to the owners of the property requesting access for our conservation section to inspect the property to ascertain if it is suitable to be placed on the register of protected buildings. The council was not given access". 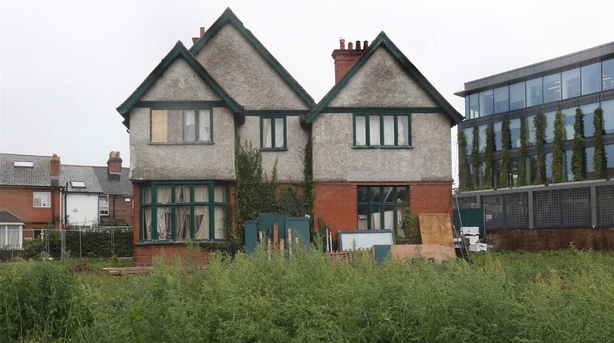 An Bord Pleanála had previously given permission for the development of a €66m apartment block on the site, which will contain 105 apartments.

The authority granted the decision despite opposition from historians, An Taisce and the Department of Culture and Arts.

Sinn Féin TD Chris Andrews said: "It's really disappointing. It's a green light for developers to come in and knock our heritage and historical sites.

"Particularly in the light of the fact the council had started the process to list it as a preserved building - so there's question marks over the legality of it and that's something we'll be looking into."

There has been a mixed reaction from locals to what happened.

One person who did not want to be named said: "Who is to say now the GPO won't be turned into a Tesco, or Newgrange will be bulldozed and turned into a theme park.

"That's all possible now thanks to the signal we're getting from An Bord Pleanála."

A woman living in the area added that if the O'Rahilly family wanted it "they would have bought it. It's gone, it's actually an eyesore".