More than 100 Irish peacekeeping troops have arrived back from Lebanon after their return was delayed last month due to Covid-19 restrictions.

The Irish peacekeeper flight landed in Dublin Airport this morning.

Some 300 members of the Irish Defence Forces have been serving in the 115th Infantry Battalion, which was deployed to South Lebanon in November 2019.

They were due to return home in May, but were delayed for over six weeks after the UN Secretary General directed that all rotations be suspended until 30 June to prevent the spread of coronavirus.

But the UN agreed to an exemption of the suspension allowing Irish troops to return ahead of that date. 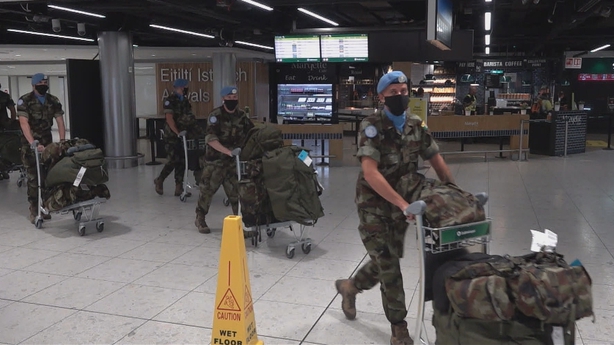 This morning, 115 personnel landed in Dublin Airport, with the remaining 170 due to follow on 2 July.

Upon arrival, they underwent medical screening and will be required to spend 14 days in self-isolation in accordance with Health Service Executive guidelines.

The 116th Battalion is now deploying to UN Interim Force In Lebanon to take over control of the Irish Area of Responsibility.

Before departure, they will have completed a 14-day quarantine period in Coolmoney Camp and Gormanston Camp.

Motorcyclists urged to 'ease off the throttle' in safety campaign

Victims of Covid-19 remembered by their loved ones