An Irish Vincentian priest who founded a school for deaf children in an Ethiopian town in 2012 has started a fundraising campaign to assist with the relief effort as students and their families in the region deal with Covid-19.

The town of Ambo, which is around a two-hour drive from the capital, Addis Ababa, recorded its first case of Covid-19 in the past week and - like most parts of Ethiopia - has limited resources to deal with the disease.

Up until the middle of March, Fr Stephen Monaghan was working at the Ambo Lazarist School for the Deaf - a Vincentian Community project supported by Misean Cara and the Ethiopia Deaf Project.

But amid increasing fears over the spread of Covid-19 and the impact the disease might have where he was working, he took the decision to return to Ireland.

"I think when I was leaving the sense I had was that it was going to be terrifying - it was hard to imagine how the country was going to respond," Fr Stephen said, adding that "in Ambo we have a very basic hospital and there wouldn't be any such thing as a ventilator and PPE doesn't exist".

Ambo is a large town with a university but the school is based on the edge of the town near the countryside.

Fr Stephen first visited Ambo in 2009 to set up a school immersion programme for two Dublin colleges that are Vincentian - Castleknock College and St Paul's in Raheny.

At that time around nine students from these schools went to Ambo and participated in the summer programme at the deaf school and when they returned, they wanted to help the deaf community there and approached Fr Stephen.

Because we were using sign language and it was all very visible it was powerful how kids who had very little communication ability were really picking up on this.

He was a national chaplain for the deaf in Ireland at the time and said the idea "struck a chord with me". He added: "When I went out and visited and saw the deaf community I realised just how difficult their lives were with the marginalisation and the stigma."

From that the relationship grew and in 2012 the school started with seven children attending; today there are over 70 students. 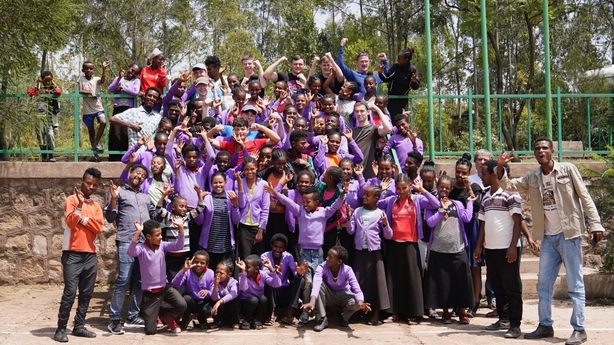 A strong link between Ambo and Ireland also developed over that time, with Irish students making regular visits to Ethiopia.

After Ethiopia reported its first Covid-19 cases in March, the deaf school was forced to close and Fr Stephen returned to Ireland.

But before he left, he began educating students on some of the new health protocols.

"Because we were using sign language and it was all very visible it was powerful how kids who had very little communication ability were really picking up on this," Fr Stephen added. 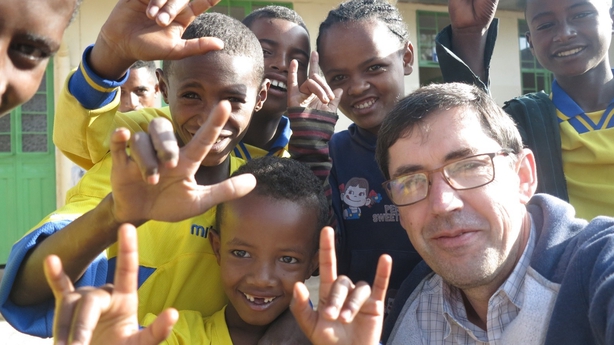 The number of Covid-19 cases since the middle of March has risen above 2,000 and, according to the figures, the disease has been relatively well contained. However, within the past week Ambo recorded its first two cases and there are fears over the town's ability to address the situation.

Fr Asfaw Feleke is the Vincentian Parish Priest of Ambo and is also involved with the deaf school. With support from fundraising he and his team are doing their best to educate and help locals affected by the Covid-19 situation.

But he said: "I don't think we are ready for Covid here.

"Awareness is coming," Fr Asfaw said, but added that there are some basic issues that are difficult to get around when it comes to resources.

We're trying to do a whole community response to ensure that people have the basic needs to be able to feed the children who come to the school, to be able to support the teachers who go out to the kids and keep them engaged

Securing funding for such items at present is proving difficult, as is implementing measures such as social distancing.

Fr Asfaw explains that "the way we live in close quarters - many people in one house - it is difficult to practise social distancing in Ethiopia.

At the moment he says he and his team are helping to provide emergency food assistance to at least 20-25 people a day in Ambo, but helping everyone is not easy because high unemployment brought about by the coronavirus lockdown has resulted in many more people needing help. 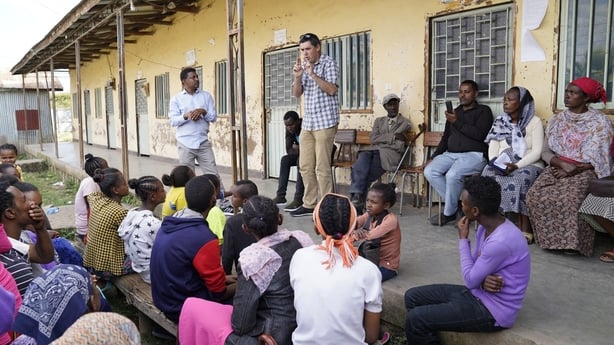 Fr Asfaw says most of people living in and around Ambo are daily labourers and the Covid-19 lockdown has "affected them in a huge manner".

Although the deaf school is closed, teachers are doing their best to keep students and their families engaged by travelling to their homes with worksheets and while they are there they also try and offer whatever support they can to struggling families.

Ireland has traditionally been strong in providing support for Ambo, Fr Asfaw said, and it is that support that Fr Stephen is working on boosting now from Ireland.

"We're trying to do a whole community response to ensure that people have the basic needs to be able to feed the children who come to the school, to be able to support the teachers who go out to the kids and keep them engaged," Fr Stephen said, adding that they want "to be able to continue to make sure the deaf school is still viable and up-and-running when they come back in October".

There are many fundraising initiatives under way, which are being mainly driven by Castleknock College and the Ethiopia Deaf Project.

The latter is organising several online fundraisers to help with the relief effort in Ambo.

Ultimately though, Fr Stephen hopes to get back working on the ground in Ethiopia - but only when it is safe to do so.

He said he feels he can do more working with the various charitable organisations locally in Ambo.

"I'd love to get back at the end of July to help the locals get through this," he said.