An 11-year-old Meath boy has said that he has suffered from racism since he was a baby.

Tré Jones read out a letter, in which he wrote about his experience of racism in Ireland for his teacher, live on air on RTÉ's Liveline.

The letter detailed the times that he experienced racist comments from adults and children. 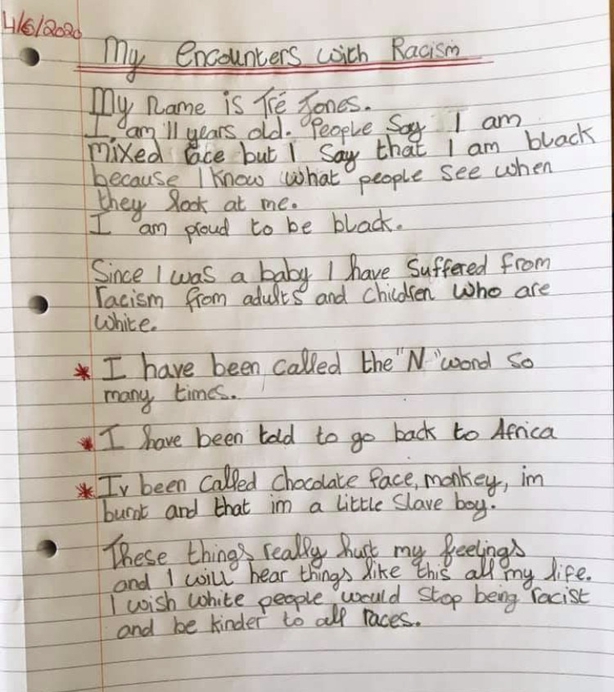 "I have been called the 'N' word so many times," he wrote. "I have been told to go back to Africa.

"These things really hurt my feelings and I will hear these things all my life," he said.

Tré's mother, Ciara, said she has witnessed racist comments being said to her son, and "some of the worst have been said by adults," she added.

"Poor Tré feels like nothing will change, and that he will just have to endure this his whole life," she said.

11 year-old Tré from Co. Meath wrote this heart-breaking and powerful letter about his experience of racism in Ireland for his teacher.
Thank you Tré for sharing. ❤️#Liveline @joeliveline @rteliveline pic.twitter.com/EgKeS2KINc

She said that "there is so much we need to learn, because we will never experience being judged for the colour of our skin"

Tré's letter drew support from other callers to the programme, with Maria saying she wanted him to know that "99% of Irish people are behind him".

She said: "1% people saying those comments don't represent human spirit or the Irish spirit. We know that there was a time that signs on doors in the UK said 'no blacks, no dogs and no Irish.'

"Irish people have been through something similar in years gone past and it is time for us to stand up for people of colour and let them know they're not alone."

Another caller, Helen, whose grandchildren are black, said: "My heart is broken for Tré".

She asked Liveline presenter Joe Duffy: "Have you ever met a black teacher yet? We all love our black nurses but we don't see black teachers or social workers."