A Spanish-owned trawler was forced to abandon plans to land catch in Dingle in the early hours of this morning due to protests by local fishermen.

The fishermen have concerns about the possible transmission of Covid-19 on the pier.

Up to 40 protesters mounted a blockade at the Co Kerry port, preventing a Spanish-registered truck from entering the pier to collect fish from the vessel.

A significant garda presence, including local gardaí and Tralee-based gardaí, were tasked to clear access to the pier. 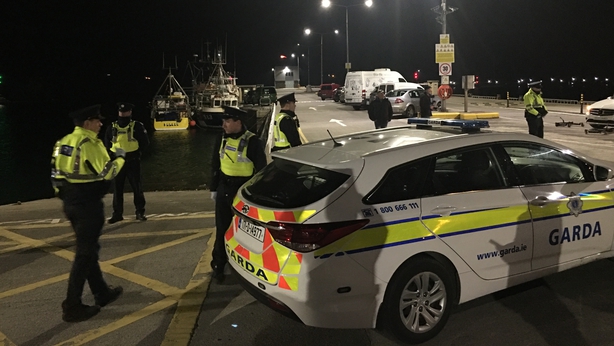 At 4.30am the French-registered, Spanish-owned trawler berthed at Dingle pier.

In line with Covid-19 restrictions recently announced by Minister for Agriculture, Food and the Marine Michael Creed, the trawler tied-up in an area specifically designated for foreign vessels and the crew was not permitted to leave the area.

However, when an agent acting on behalf of the Spanish company attempted to drive on to the pier, the local fishermen lay on the ground denying him access.

Gardaí attempted to negotiate, but the fishermen refused to lift their blockade. The Spanish-registered truck did not attempt to enter the pier and at 5.30am the trawler left Dingle Harbour.

The agent for the Spanish company Ricardo Ferriera said a decision was made to land the catch in Castletownbere.

Up to 30 protestors now blocking the entrance to Dingle pier. Local Gardaí have arrived.

The fishermen say they will prevent a Spanish registered truck from loading fish from French trawler, arriving later tonight, amid fears of #COVID19 transmission. pic.twitter.com/4Eh5l3q9ZN

He said: "We have a ferry booked for the truck and we could not risk being delayed in Dingle, so we decided to go to Castletownbere instead.

"It is disappointing. We have done everything that the Irish authorities have asked us to ensure that we are in compliance with Covid-19.

"We have completed all the relevant HSE Covid-19 paperwork and the designated zones were ready on the pier. It is four weeks since this crew left Spain to go fishing.

"There is absolutely no risk of virus."

Spokesperson for the Dingle fishermen Mickey Hennessey said they were delighted with the outcome of the protest.

"We achieved our objective, which is to protect our town from coronavirus. We have no issue with foreign boats coming in here, they've been coming in here for years, we just don't want them coming in here now while this crisis is happening," he said.

"This isn't a fishing issue, this is a health issue and we will continue to block foreign vessels to protect the town."

The latest blockade follows similar protests in Dingle and Castletownbere three weeks ago.

The move was condemned by seven Irish fishing organisations who described the action as "unnecessary, alarmist and without any reasonable nor rational foundation".

Minister Creed subsequently announced a number of measures to address the concerns raised by fishermen.

The measures included designated landing zones in Irish ports for foreign-registered vessels and a requirement that foreign crew must remain within the landing zone.