Séamus Mallon was a bridge-builder who dedicated himself to peacemaking, Archbishop of Armagh Eamon Martin has told mourners at his funeral.

Archbishop Martin said: "Here was a loving father, husband, brother and grandfather. Here was a dedicated Catholic school teacher and principal, a kindly and attentive neighbour, a man of many talents who wasted none of them.

"Here was a wholesome human being who spent himself unselfishly for his family, his local community, his country and for the common good.

"Here was a peacemaker, a 'bridge-builder', a leader, a statesman, and a faithful worker for the Kingdom of God." 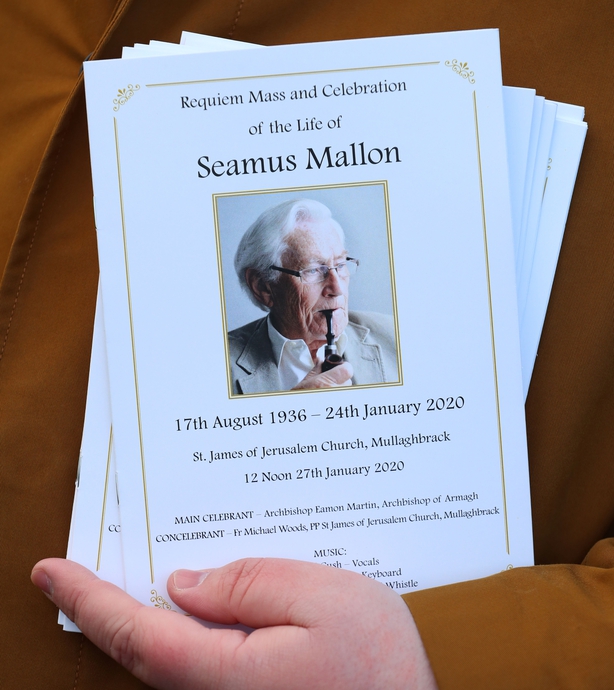 After the funeral mass, Mr Mallon's friend Tim O'Connor, a former secretary general to the President of Ireland, delivered a tribute.

He described him as a "great chieftain of Irish political life".

"The annals will record Séamus Mallon as one of the key leaders of a seminal time in the history of the island of Ireland," he said.

He hailed him as a parliamentary orator ranking alongside the likes of Daniel O'Connell and Charles Stewart Parnell.

"Séamus Mallon was a giant of his time," he said.

"That is why today, in this beautiful ceremony in this beautiful church, it is important that we take the opportunity to reflect on, and give thanks for, the sacrifice, endurance, courage and leadership of a man whose contribution has meant a better life and future for every single one of us on this island."

In keeping with his request, Mr Mallon's funeral mass took place at St James' of Jerusalem Church in Mullaghbrack, the same church where the funeral of his wife Gertrude was held three years ago.

They included the former SDLP deputy leader's own memoir, his maiden speech in the House of Commons, a photo of him with Pope John Paul II, a fishing reel and some golf balls from Co Donegal club Rossapenna.

Mr Mallon was a former teacher who lived in Markethill, a largely Protestant town, before becoming a politician. He was deputy leader of the SDLP from 1979 to 2001.

He was a key figure in negotiating the 1998 Good Friday Agreement and, after his death, tributes were paid from across the political divide.

Mr Mallon implemented the newborn political power-sharing at the devolved parliament at Stormont and his former partner in government and ex-first minister Mr Trimble said he was a committed democrat who lived up to his word.

Archbishop Martin added: "Séamus Mallon was unequivocally anti-violence. Like (Seamus) Heaney, he saw the ongoing bloodshed of the past as a 'waste of life' and a 'waste of spirit'.

"He empathised from his heart with all those who were suffering and his consistent condemnation of violence from whatever source often left him open to insult and unfair criticism.

"But his principles, rooted in a strong faith and in an unstinting commitment to a culture of life, remained steadfast in face of such opposition."

Archbishop Martin said: "In recent days many commentators have spoken of Séamus as a man of integrity and courage who was unafraid to speak up or call it as it was - even at great personal risk.

"He has been described as fair and principled, and as always respectful of the rights of others.

"Visitors to his wake have shared stories of his astute leadership and tough negotiating skills, and also of his 'stubborn' determination and no-nonsense directness at times.

"But many others, who have known Séamus in a personal way, have spoken of him as a devoted father, grandfather, brother and as a faithful friend."

At the beginning of the mass, parish priest Fr Michael Woods said: "It was his personal wish that his [Séamus Mallon] funeral should be here in the church in which so many sacred moments in his life and that of his family were marked and celebrated, including his own baptism over 83 years ago.

"Séamus Mallon was a man of deep faith and it is our privilege to host the final liturgical and sacred moment of his long, full and rich life here in the place of profound importance to him.

"We are very proud in this parish of the many achievements of Séamus Mallon and the enormous contribution he made to peace and reconciliation on our island.

"For that reason, we are particularly pleased that several representatives of other Christian denominations have joined us to say their farewells and pay their tributes to a man who placed huge store by the holding out of the hand of friendship."