A man is in a serious condition in hospital after the tent he was sleeping in was removed from the banks of the Grand Canal by an industrial vehicle.

The homeless man was sleeping in a tent that was removed by the vehicle during works being carried out by Dublin City Council and Waterways Ireland.

The incident happened at the Wilton Terrace/Leeson Street junction between midday and 1pm yesterday afternoon.

The man was admitted to St Vincent's University Hospital where he underwent surgery for what are described as life-changing injuries.

Gardaí said in a statement that the tent was being removed "in an attempt to tidy the canal walk way".

Dublin City Council said the Dublin Regional Homeless Executive is liaising with the hospital and "every support is being provided" to the injured man.

It said the DRHE has been engaging with him for some time and accommodation "remains available to him".

The council added that the tents beside the canal were in a "precarious and dangerous location" and "that every action taken by State services is taken in the interest and safety of those experiencing homelessness". 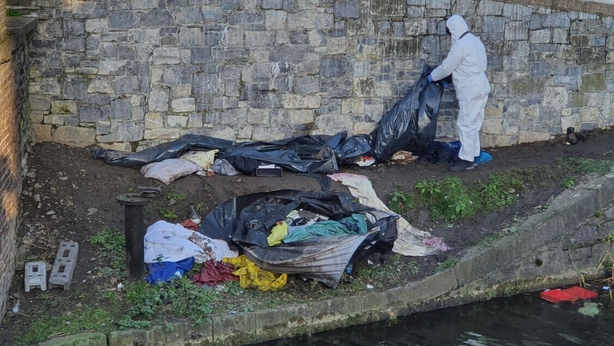 Waterways Ireland said it was working with the Dublin Region Homeless Executive to remove tents that had become a public health hazard.

It said it would not comment further as a garda investigation was under way.

The Health and Safety Authority said it was notified of the incident last night and its inspectors are carrying out a preliminary investigation.

Taoiseach Leo Varadkar has said he was very concerned by the case.

He said it was his understanding that the Dublin City Council and Waterways Ireland did check the tents before removing them, but "obviously something has gone wrong here".

He said it was important that the Lord Mayor of Dublin Paul McAuliffe, who is politically responsible for the city council, make a statement on the matter.

In response Mr McAuliffe said he was "dissapointed" with the Taoiseach's response.

He said: "A man was seriously injured and yet An Taoiseach appeared to be more interested in appointing blame to somebody else."

In a statement to RTÉ News, the Fianna Fáil candidate said he understood that Waterways Ireland and the Dublin Regional Housing Executive were on the scene to support any homeless people with accessing accommodation.

"I understand due to the precarious location of the tent, Waterways Ireland decided to make use of a mechanical vehicle. All of these details will now be the subject if a Garda investigation," he said.

"There may be an election ongoing at the present but a human being has been seriously injured this morning. That was my first concern when I heard about it, and I wanted to find out the details and so I have asked for a full report. It seems that the Taoiseach's first thought was to play a political game."

Fianna Fáil leader Micheál Martin said it was "extraordinary" that the Taoiseach would call on the Lord Mayor of Dublin to make a statement.

Mr Martin said what happened was terrible and he highlighted the issue of homelessness.

Minister for Housing Eoghan Murphy said he has demanded a full report into the incident.

On Twitter, he also said that one of his campaign posters, which was located at the scene, has been removed.

I was saddened to hear of the incident by the canal yesterday. My thoughts are with this poor man as he recovers in hospital. I've demanded a full report in to the incident which is under Garda investigation. My campaign poster which was located at the scene has been removed.

Independent Councillor Anthony Flynn, who is CEO of the homeless charity Inner City Helping Homeless, has called for a full investigation of what happened.

He said that eviction notices were issued to people sleeping in tents some weeks ago by Waterways Ireland.

"We need to find out what happened and why and if there was a housing plan in place for these people," he said.