The Irish Farmers' Association has said a further blockade of a retail distribution centre is planned for Friday morning.

RTÉ News understands that the blockade is likely to take place in Co Cork.

It is understood the planned blockade will also commence early in the morning.

The Aldi facility in Naas was blockaded by farmers on Thursday in a protest over beef prices.

The German retailer distributes products to stores all over the country from its Kildare facility.

The IFA said retailers, who they accuse of driving down food prices, need to address the poor price farmers are paid for their cattle.

There was an exchange of views between protesting farmers and workers outside Aldi's distribution centre in Naas this morning as farmers mount a blockade in a protest over beef prices | Read more: https://t.co/SXmBk68ne7 pic.twitter.com/fH2IoRBSYg 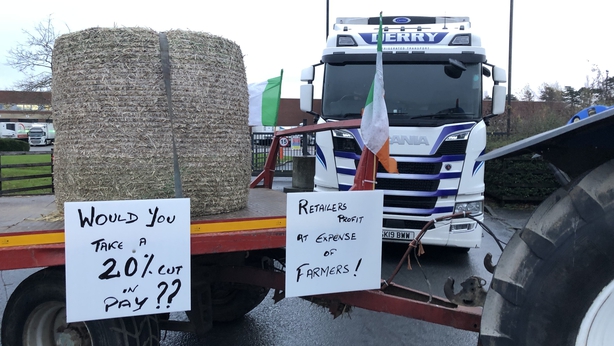 Mr Healy is calling for an immediate beef price increase.

Prices in Ireland are well behind UK and EU levels, something the meat industry conceded to RTÉ News this week.

The IFA has accused retailers of working "hand in glove with processors".

Its action puts those retailers at the centre of attention when it comes to the long running campaign for improved cattle prices.

Speaking on RTÉ's Morning Ireland, Mr Healy said it could be the first of many blockades until farmers get a price increase for their beef.

He said the IFA took the action after they received no offer from Meat Industry Ireland during a Beef Taskforce meeting held earlier this week.

Mr Healy said there was a widening gap between the price beef farmers are being paid in Ireland the rest of the EU. 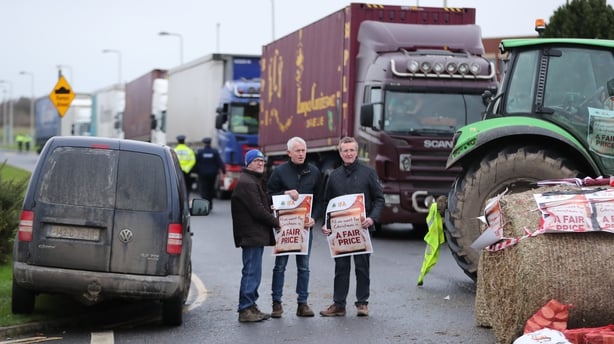 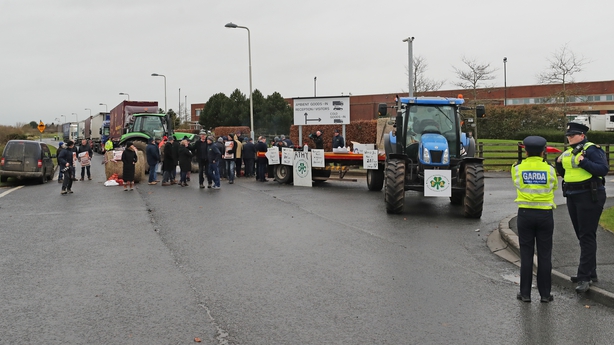 "The beef price index showed a massive gap of 45 cent between Ireland and the UK. A second index out this week showed that gap had widened to 50 cent a kilo to what Irish farmers are getting and what UK farmers are getting," said Mr Healy.

He said the IFA is calling on retailers to go straight back to processors and tell them that they need a price increase for farmers.

Otherwise, he said, they will continue with their blockades.

A major retail distribution centre is being blockaded by farmers in a protest over beef prices, @franmcnulty reports from Naas | https://t.co/iK5H5itsR5 pic.twitter.com/kvO9SAdfG4

In a statement, Aldi said it was "extremely disappointed" by the IFA's action.

It said: "We welcomed the resumption of the Beef Taskforce this week and have engaged positively with farmer representative organisations on the beef issue over recent months.

The statement added: "Aldi received no request for engagement on this issue from any member of the IFA leadership, no communication about specific concerns about the mechanics of the beef market, including age specification, and no warning of any grievance the IFA had before this morning.

"Aldi is fully committed to co-operating with the Beef Taskforce and met with the one of the representative groups, the BPM, as recently as last week to further update our position.

"As part of our preparations for the taskforce, we have initiated research on a wide range of beef products to determine a number of issues.

"Our work also includes a complete review of procedures and processes with our suppliers to ensure we are meeting all customer and market requirements.

"Any action outside of this process is short-sighted and not constructive."