The last three unmarked graves of the 14 people killed on Bloody Sunday in Dublin 99 years ago have been replaced with commemorative headstones.

The headstones were unveiled during a ceremony in Glasnevin Cemetery for the youngest victim - 10-year-old Jerome O'Leary - along with Patrick O'Dowd, 57, and 40-year-old Michael Feery.

On 21 November 1920, British forces opened fire in Croke Park during a football match between Dublin and Tipperary killing 14 people and injuring dozens of others.

The attack was in retaliation for the killing of 14 men in an IRA operation targeting British agents earlier that day. 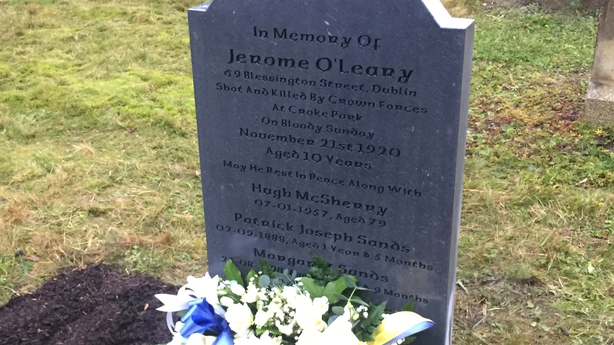 Speaking on RTÉ's Morning Ireland, Liam Dineen, who is related to Mr O'Dowd, said he felt emotional about the day.

He said his late Aunt Mary was Mr O'Dowd's only daughter and she never had closure following his death.

Mr O'Dowd came from Buckingham Street. He worked as a labourer for Clarkes Builders in Fairview.

Mr Dineen said his aunt "missed him for the rest of her life and she never had closure ... he went to a match and never came home".

He said there was no apology about his death and it was always talked about with regret, sorrow and sadness.

Mr Dineen paid tribute to The Sunday Times journalist Michael Foley who has carried out extensive research on the Croke Park massacre.

He said the research showed Mr O'Dowd had helped to save others before he was shot dead.

He said that today's ceremony was an honour and would generate treasured memories for him that he could pass on to future generations.